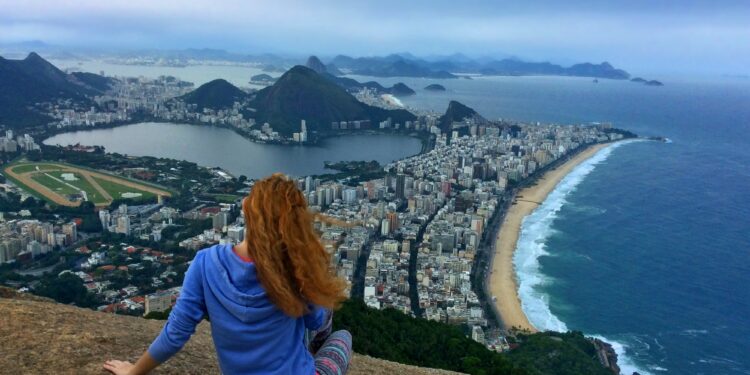 As seen a thousand times in pictures… still even more breathtaking in person! Make sure to take note of all these unique places to visit in Rio de Janeiro!

The historic sites and buildings in the centre of Rio range in age from the colonial period when the city was founded, the period of the Portuguese royal family’s stay in Brazil, and the first and second reign.

Saint Sebastian’s Cathedral, also known as the Rio de Janeiro Cathedral, can also be found in the centre, with its modern style in stark contrast to the colonial architecture.

A world-known beach, Copacabana, is enjoyed by tourists and Cariocas (Rio natives) alike all year round. The historical Copacabana fort divides Copacabana and Ipanema, another famous beach. It has a museum and restaurant open to the public.

Ipanema beach in the district of the same name is one of the city’s most famous beaches, and therefore the world. The beach is also renowned for having served as inspiration for the song ‘Girl from Ipanema’ by Tom Jobim.

The hippie fair has run every Sunday for four decades and is the world’s largest outdoor arts and crafts gallery. You will find it in General Osório square from 7:00 to 19:00 every Sunday.

Charming, historic Santa Teresa with its winding, narrow streets is reputed to be the neighbourhood that houses the largest number of artists and intellectuals in Rio. To get there, catch the bondinho (tram) up the hill from the city centre and admire the view of Guanabara Bay. Once up top, be sure to pop into the numerous studios and galleries and lunch at one of the typical restaurants.

Catch the glass-walled cable car from Urca up the monolithic Pão de Açucar. Feeling adventurous? You can always rock climb up the granite and quartz mountain rising straight up from the water’s edge.

The home of Brazil’s bibliographic and documentary heritage, the National Library is the largest library in Latin America. Located in Cinelândia square in the centre of Rio de Janeiro.

The National Historical Museum has a vast collection of documents, pictures, coins and stamps.

Standing atop the 2300 feet Corcovado mountain, the Christ statue embraces the city of Rio de Janeiro. The statue itself is majestic, but it is the 360-degree view that will blow you away! Not literally… there are safety rails to prevent this.

Aterro do Flamengo and MAM

Aterro do Flamengo (Flamengo Park) is the largest leisure area of Rio de Janeiro, conceived and constructed by architect Lota de Macedo Soares with gardens designed by a world-known landscapist Burle Marx. The park is also home to the Museum of Modern Art of Rio de Janeiro (MAM).

The UFO-like structure of the Museu de Arte Contemporânea (Contemporary Art Museum) is an artwork in itself. Designed by Oscar Niemeyer, the saucer-shaped modernist structure is set on a cliffside above a beach and overlooking the bay. Take a boat to Niteroi to take in even more of the surroundings.

Visit the biggest soccer stadium in Brazil, a sacred area dedicated to the gods of the sport. The major players in the history of Brazilian soccer started and continued their careers in the stadium. For example, the first time that Pelé played for Brazil was in Maracanã in 1957.

The São Cristóvão Fair is run by the Centro de Tradições Nordestinas (Center of Northeastern Traditions). It boasts all the cultural and culinary diversity of the region. The setting has long been a meeting point for immigrants from the north, who originally arrived in illegal transport with appalling safety conditions.

The one and only Rio Carnival! A nationwide party with the official Rio parade as the highlight. The parade is a fierce competition between samba schools held at the Sambadrome, a 700m long parade ground.

Lapa, an old neighbourhood in Rio’s centre, is the absolute reference point for Rio nightlife. Innumerable bars, nightclubs and concert halls are hosted in the gorgeous old buildings in various states of repair. Here you will find great samba and forró (Northeastern Brazilian music) and music from Brazilian and international bands and DJs. Fundição Progresso and Circo Voador are a couple of the larger venues.

The Carioca Aqueduct, more popularly known as the Arcos da Lapa is one of the postcard pictures of Rio de Janeiro. It is the most representative symbol of Old Rio that survives to this day.

A vast urban forest, Floresta da Tijuca (Tijuca Forest) is a treasured national park. Home to hundreds of species of plants and wildlife, many threatened by extinction and found only in the Atlantic Rainforest, it is hard to believe this area was previously cleared for the planting of coffee. Visit the various waterfalls, take a guided trip to appreciate the diversity of the forest, or trek to the very top of the city.

Take a quiet and relaxing stroll through an incredible variety of flora, and you will soon forget you were just moments ago on the noisy Rua Jardim Botánico (Botanical Gardens Street).

The architecture at the Confeitaria Colombo, with its touch of Art Nouveau, takes you back to Rio’s Belle Époque.

Ilha Grande is the largest island off the coast of Angra dos Reis, two hours from Rio. The island is noted for its tropical beaches and rugged landscape.

Parque Lage (Lage Park) couples lush Atlantic forest with a nineteenth-century architectural ensemble in the middle of this great city. Before or after visiting the park, walk or cycle the popular 7km path around Lagoa, the lagoon considered the heart of Rio.

Hotels In Rio De Janeiro Worth Staying At

16 Exciting Places To Visit In Your Twenties: Pack Your Bags!

16 Exciting Places To Visit In Your Twenties: Pack Your Bags!

What To Do In Vancouver Within 5 Days: An Awesome Trip!