My Unforgettable Trip to Cuba 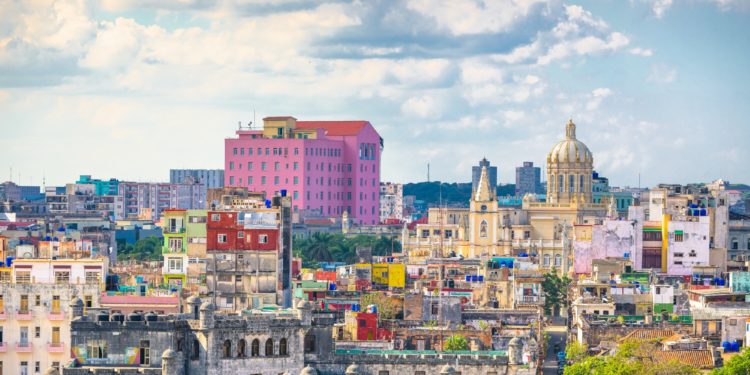 My journey to Cuba was back in 2003. I wish I had my own pictures from this trip, but back in the days, you only had the printed versions, and after moving so many times, they got lost…forever.
Luckily I found some pages, my travel diary about this trip. I just remember clearly what a beautiful country Cuba is and really want to return there someday. Perhaps I could combine it with a cruise across the Gulf of Mexico.

Arriving at Havana, the capital of Cuba

On my 21st birthday, I was up in the air direction of Cuba. I landed in the evening in Varadero on a rainy summer day. I was so super nervous; this was my first big adventure.
The first shock was at the luggage belt, everyone collected theirs already, and mine was nowhere to be seen. Then, randomly I looked around the hall and spotted it on another belt…what a relief that was! After that, I managed somehow to find my shuttle bus to the hotel, Bellevue Deauville in Havana.
The following day after getting some information about the upcoming trip, I changed some money and went straight to bed again. Around lunchtime, I got a lift to another Hotel Club Acuario, which was a little outside from Havana and the tour’s starting point around the island.

You get quickly the feeling of how easy-going the locals are; while I tried desperately to find out where to be, they just smiled at me and replied in Spanish. But, unfortunately, their English was really bad. So after they served me a welcome drink, which I quickly tossed off before I realised it was something with Rum, I decided to chill out.
It was already dark when I got some information that my trip would start in the morning at 9 am.
Ready to check out the next day, the people at the reception looked weird at me and wouldn’t take my key. So, of course, again, the language barrier, why didn’t I bother to learn a little Spanish? Somehow I found out that I had another night booked…awkward.
After this was all sorted, my luggage back in my room, I got on the bus to Havana.
Walking through all the little streets while the city just woke up and the cafés opened their doors, I spotted how clever some locals were to get some money from tourists. They dressed up funny that you couldn’t resist taking pictures, and of course, they requested tips for it or the kids running around you begging for something. I was quickly informed that kids sometimes bring more money home than their parents get as salary and that it was better to give them sweets instead.
The heat was already unbearable, but there was just so much to see that I kept going. Finally, after a few more hours exploring the city, I couldn’t wait for the hotel pool and chilled out the rest of the day.
I checked out for real this time for the next day and took a two-hour bus ride to San Diego de Los Baños.

Driving on a highway in Cuba was nothing like back home; you overtook people standing on the side lane, riding bicycles or horses.
After leaving the highway and passing through tiny villages, I reached my next hotel: Mirador de San Diego, which was based in the middle of nowhere with a nice view of a mountain and the fantastic landscape.

A local brought me around the countryside, passing a broken bridge and entering the jungle. In a nearby village, a family allowed me to look at how they live, the house was so tiny, and only the necessary stuff was there. Still, maybe the less you have, the happier you are…I didn’t feel they suffered, and the kids ran around with a big smile on their faces.
I got back to the hotel just in time before a big storm hit the town. The tropical rain was lashing down, but it was great to look at. It rained like that for one hour, and then the sun came out as nothing had happened.

The next day I left the hotel and went to a tiny village to visit a tobacco factory. It was impressive, the manufacturing, from start to finish everything was handmade. They dried the tobacco leaves, rolled and pressed them until they finished off with a cigar, gave each of them a tax seal and sorted it into the boxes, one by one. The workers were sitting on these look-alike school tables and focused on doing what they had to do, even with a smile. One cigar resembled the other one, and I now saw its value and why they were so expensive.

I continued my tour to Las Terraza, a beautiful place of nature, little waterfalls and rivers where you could chill out and swim. Still, heavy rain prevented me from doing so. Instead, I got invited by a local family for lunch on their terrace. The atmosphere was just unique, looking at the rain again while enjoying the meal, and for once, I had some juicy chicken. At this stage I have to say, the meals in Cuba are not the best, mostly the meat is tough, served with rice and black beans.
Later I arrived in Havana again as I had an early flight to Isla de la Juventud.

The next day started very early, and while standing on the runway, I discovered the plane, which looked a bit unsafe. I boarded the plane with an uncomfortable feeling. Still, I tried to convince myself that the pilots knew what they were doing and would land me safe on that island. The take-off made loud noises, the floor vibrated, and it looked like in a nightclub with these fog machines during the flight. The locals didn’t even bother, so I calmed myself down.

I continued with a trip to the famous Presidio Modelo, where Fidel Castro and his brother Raul were held from 1953 – 1955. The area had four big circular prison, and the buildings had around 100 cells per level, and each was shared by two prisoners. Only one guard was used per complex, standing in a tower watching over all the prisoners. I walked all the way to the top, and the tremendous height made me nearly dizzy. It was hard to believe that one person could watch after so many criminals.

The tour came to an end; I flew back to Havana and got a bus all the way to Varadero, where I enjoyed a whole week at the beach and stayed at the Hotel Palma Real, a fantastic all-inclusive resort. I surely want to go back in the future

Best Places To Stay In Dublin, What To See And What To Eat

Top 9 Places To Visit In Phoenix

Top 9 Places To Visit In Phoenix

Wondering What To Do In Budapest?