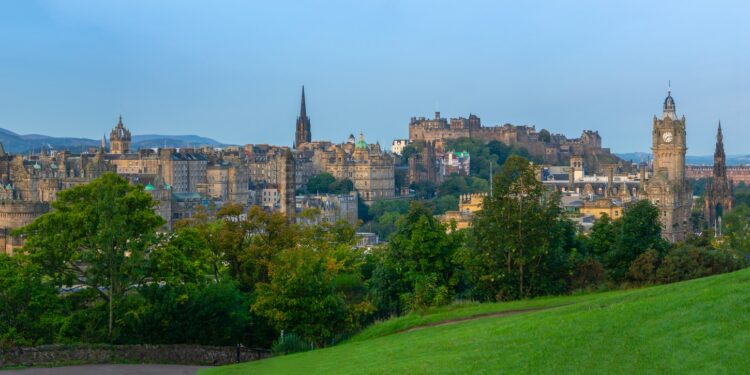 As travellers, we’re drawn to certain things; the vast, beautiful expanses of rugged mountain ranges, serene, secluded beaches, the ruins left by ancient civilisations and the world-changing architecture in modern cities. The list goes on and on, and everyone’s list will be a little different. I think, though, something on every traveller’s list of places to visit will be castles. There is something inherently appealing about them. Maybe it’s the fact that many are in idyllic settings, high on hilltops overlooking forests or river valleys. Because there is so much history, we can learn about the people who called these places home and the battles fought to protect their surrounding lands. Whatever the reason, something steers a traveller’s compass towards castles. But our fascination with them is where their similarities end.

The UK has much to see as a visitor. On my way to Scotland, I faced a dilemma. Edinburgh Castle or Stirling Castle? They are the two most popular castle visits in Scotland and are located near each other. Some say Edinburgh is best to visit, others Stirling. Since I’d be staying in both cities, I decided to compare the two myself and tell you all what I found. If you find yourself travelling in Scotland, you can choose where to spend your vacation dollars.

I visited Stirling first, and from the cemetery that sits next to the castle, there is a decent view of the hilltop it sits on. From this vantage point, there are two big buildings and part of a castle wall visible. ‘That’s it?’, I thought. There didn’t seem to be a lot going on, but when walking towards the entrance gate, you’ll realise several buildings make up this castle. They ranged from small to very big and were built by many generations of royalty that ruled there. I rented the audio guide while touring the castle grounds and went to every room in every open building. After spending about 17 pounds for my day at the castle (about $25 USD), I wanted to get my monies worth! Also, I wanted to have the whole experience so I could compare Stirling to Edinburgh. The audio guide was very informational and engaging. It told the story of each building on the castle grounds, the people who built them, as well as a lot of Scottish history.

Like Stirling, Edinburgh Castle is not a typical Disney-esque looking castle with one enormous main building complete with towers and battlements that dominates a landscape and is surrounded by wall and moat. It, too, has several buildings that were built over centuries. Also, like in Stirling, to get the whole castle experience, I rented the audio guide and went into every open area. Again, the audio guide was filled with great historical information about the castle and interesting facts about the kings and queens who ruled there.

Like at Stirling, the Edinburgh Castle has Regimental Museums, a Great Hall, an old chapel, and a Royal Palace. It also has some interesting extras like the Scottish Crown Jewels, the Scottish National War Memorial, and Prisons of War. There is also the One O’clock Gun, which supposedly fires nearly every day at precisely 13:00 since its inception in 1861 as a time signal for ships in the Firth of Forth. Although I say supposedly because of the 8 days I was in Edinburgh, I did not hear the One O’clock Gun once.

It is interesting to walk through all the buildings, including the Royal Palace (which recreates how it would have looked in the mid 16th century), the Great Hall that is the largest ever in Scotland, and the Chapel Royal (built-in 1594 for the baptism of James VI’s first son). The complex also houses the Regimental Museum, which tracks the history of the Argyll and Sutherlands British Army regiment, formed in 1881 and based at Stirling Castle, the Stirling Heads Gallery, which showcases much of the carvings from around the complex, and the Castle Exhibition that shows a timeline and information of all monarchs that shaped the castle. To me, it felt more like a museum.

Beauty and view from each one

Again, many buildings make up the castle grounds. Unlike Stirling Castle, there’s not as great a visual contrast in building styles. I’m sure someone more versed in architectural styles from these periods would see dozens of differences from building to building. Still, to a layman, they seem similar. It is still a beautiful setting for sure; there just aren’t the striking variances you see at Stirling.

The castle sits on a high point in the centre of Edinburgh, thus has a great view in all directions. This includes a view of Arthur’s Seat to the east and the Firth of Forth to the north.

Many buildings in the complex are all built at different periods and in a mix of building styles. The visual differences of the buildings make going through the ‘village’ an interesting and beautiful walk. My favourites are the Great Hall, the Chapel Royal interior and the old gatehouse.

The castle sits on a hill on the edge of Stirling. There is a good view of the city and the River Forth. Looking east, you can see The National Wallace Monument and the Ochil Hills a few miles away.

Advantage, push (I think they’re both overpriced, just like seemingly everything in the UK)

So, two votes (tour & view) to one (beauty) for Edinburgh over Stirling on my personal comparison. Both were very interesting, and there’s a lot of information to soak in. History buffs would have a great day just reading the news and listening to the audio guide at either site. I think they are definitely worth visiting but if you’re in the area, pick one. Going to both is slightly redundant.

I’ve visited many castles while travelling in Europe, and one thing I’ve learned: all castles are not equal. Some are dark, others very colourful. Some near present-day city centres, others much more secluded. Some look the part of a picturesque Disney fairy tale castle, some aren’t so beautiful, and others just plain ugly. Some overlook small rural communities, other urban sprawls. Many show the scars of countless battles; some never saw one. And some, after centuries of life, lie in ruins, while others stay well-preserved.