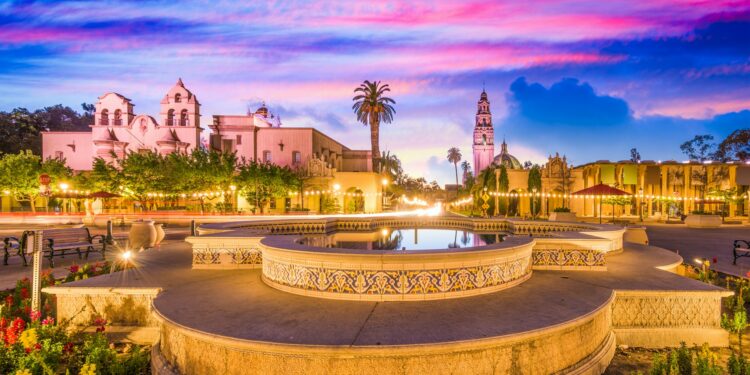 There are quite a few museums in San Diego. The Balboa Park houses most of them and is considered one of the top places to visit in San Diego. At Balboa Park, you can stroll from museum to museum in a historical and beautiful Spanish setting.

Here you will find a giant-screen film called the Ocean Oasis that will take you on a journey through Baja, California and the Sea of Cortez. There are also travelling exhibitions and regional displays of the museum’s 7.5 million specimen scientific collection of marine invertebrates, ornithology, mammalogy, herpetology, botany, mineralogy and paleontology.

There are also educational programs that include lectures, nature walks, teacher workshops and a loan library.

The Casa Del Prado building is next door to the Natural History Museum and was originally built for the 1915 Exposition and called the Varied Industries and Food Products Building. After many years and name revisions, the original building was torn down and rebuilt in 1971 and named the Casa Del Prado Theatre.

The Botanical Building was built for the 1915 Panama California Exposition. A 193 by 43 foot reflecting pool south of the Botanical building contains water lilies, goldfish, koi and lotus.

During World War II, the reflecting pool was used as a swimming pool for sailors at the Naval Training Station to learn to swim. When the Botanical Building opened to the public in 1915, birdcages holding Linnets, thrushes and canaries were placed among the palms, banana trees, bamboos, Aralia chabrierii and Aralia elegantissima. Unfortunately, some plants grew too tall, so they were either removed or cut down.

Places To Visit In San Diego: Museum of Art

Places To Visit In San Diego: Museum of Us

This museum occupies the most recognised building in Balboa Park, the California State Building and Quadrangle, which marks the entrance into the Exposition from the West Gate.

Exhibits portray the chapters of mankind and display collections of artifacts, folklore and physical remains. In addition, the museum is the place to learn about ancient Egypt and the native cultures of the Western Americas.

Live demonstrators make tortillas in the traditional Mexican manner. In addition, an Oaxacan weaver demonstrates spinning and floor loom on Wednesdays through Sundays.

This is the oldest Californian professional theatre organisation that occupies the refurbished Old Globe Theatre building. Initially constructed for the 1915 Exposition for the presentation of Shakespeare Plays, the building went through several remodels and was destroyed by a fire on March 8, 1978. The new Old Globe Theatre was dedicated on January 5, 1982.

This institution is dedicated to the world of folk art. The late Dr Soetsu Yanagi coins the name “Mingei” by combining the Japanese words for all people (min) and art (gei).

The Mingei International Museum resides structure was built for the 1915 Panama-California Exposition. Like several other buildings in Balboa Park, it had gone by different names. Finally, in 1935, the building was renamed the House of Charm, by which it is generally recognised today.

The Japanese Friendship Garden began with a Japanese Tea House built in 1915. San Diego’s Sister City relationship with Yokohama in 1950 contributed to the desire for a Japanese Garden at the Balboa Park. The 1.5-acre garden includes an entry plaza with a tea stand, outdoor seating, koi pond, fountain, trellised bonsai garden, 100 cherry trees and a learning centre for children.

The organ pavilion was donated to the City of San Diego by John D. and Adolph Spreckels in 1914 and contains over 4,500 pipes. It can seat up to 2,400 people and is wheelchair accessible.

John D. Spreckels was a dedicated musician and pipe organist who added an enormous 41-rank Aeolian Pipe Organ to his home on Glorietta Bay. Spreckels owned the San Diego Street Railway System, which he wanted to extend through Balboa Park to hasten development and San Diego’s economy on the other side. Spreckels funded daily concerts on the outdoor organ until he died in 1926.

This museum is home to many classic and antique cars, vintage motorcycles, racers, exotics and prototypes that illustrate the history of vehicles.

The museum moved to the Ford Building in 1980 from the Balboa Park Electrical Building, which suffered an arson fire in 1978. It has a collection of over sixty-five aircraft and spacecraft.

The Ford Motor Company provided the largest building and exhibit in the Palisades area of Balboa Park. The Ford Bowl, now called the Starlight Bowl, is built next to the Ford Building for Opera performances and is now home to the Starlight Theatre. In addition, Ford has sponsored concerts by both the San Diego and Los Angeles Symphonies during the 2nd year of the Exposition.

The Hall of Champions Sports Museum opened in the renovated Federal Building in Balboa Park. The 70,000 square foot multi-sports museum showcases 40 different sports and has an athlete’s Hall of Fame devoted to San Diego heroes. Kids are even invited to touch sports equipment used by the greats and test their own athletic abilities in the interactive exhibits.

The museum is located on Harbor Drive. Since its inception in 1948, it has allowed guests to explore magnificent historic ships. The Star of India, which was constructed in 1863 and is the world’s oldest active iron-hulled ship, is the most popular attraction.

Some Interesting Places To Visit In Stuttgart: Museums, Palaces And More