Remarkable Places To Visit In Auckland (Get Off Queen Street!) 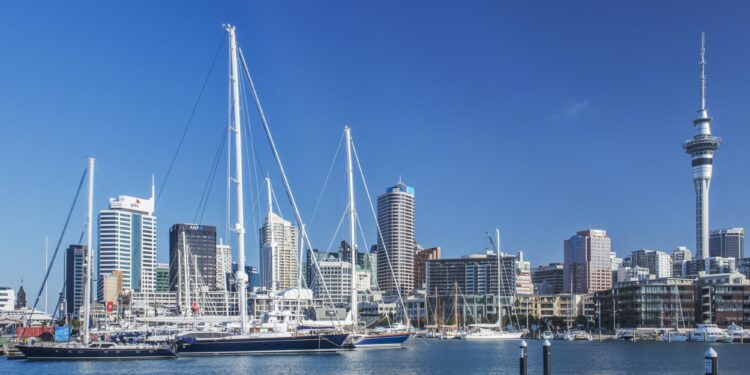 “I can’t wait to leave Auckland!“ This is a phrase often heard from other backpackers during the numerous times I was in Auckland. At first, they would be head-over-heels for the City of Sails, but after a week of two partying their faces off on Queen Street, they were “over it“. The City of Sails seems to always get a bad reputation for being all sorts of things except delightful. I know exactly why this is — and I’ll even admit that I thought Auckland was kinda crappy after just a few days there. But I was wrong to judge it based on what most other people mentioned above: Queen Street. There are places to visit in Auckland that are really worth it and will make your stay memorable.

When I first visited New Zealand, I spent my first week after arrival strolling up and down Queen Street with a rad backpacker I met at the airport. Unfortunately, after the sparkle of the ever-present Skytower sighting fizzled, it seemed a little dirty, extremely busy, and horribly expensive. We did a LOT of walking, but no genuine exploration of the city, and we couldn’t wait to leave based on what we saw. Just up and down, and up and down Queen Street some more. And a couple of wicked hangovers.

Then, I returned from the Northland of New Zealand after doing a tad bit of guerrilla camping in my hammock; I figured I would come back to Auckland for a couple of days to reconnect with the world. And I might as well give Auckland another try. I’m happy I didn’t write off Auckland. Once you step off Queen Street and see the harbour, the numerous parks dotting the city, the old reconditioned factories in the Britomart, and everything else, Auckland becomes quite a charming place. I started by trying to find some greenery, and no, not that kind. After spending two weeks living in the wild, all I wanted was to chill out under a tree some more. I wanted to walk in a park, and I wanted to get away from the noise.

Places to visit in Auckland: The Parks

Turns out Auckland has tons of parks all over; Parks large and small, usual and unusual, and some of the most exciting parks I have ever seen.

I was walking back to downtown Auckland with a new friend, and we stumbled upon Western Park. This park was fascinating and popped up out of nowhere while we were passing through Ponsonby. Chunks of buildings are strewn across the green grass, a beautiful ode to nature and chaos. A travel guide told me the old Auckland museum sunk into the ground, and I gullible ole’ me believed him completely. Still, it is just an incredible art project.

Another park to soak up some sun and chill out is Albert park, a smack dab in the middle of the city if you stray just a block or two from Queen Street.

Talking about escaping the city, Waiheke Island is just a short ferry ride and a fantastic place to spend a sunny day. I went to Waiheke Island for a day, known as the Island of Vineyards, to look for a job. But a half an hour in, my friend Pirmin and I ended up wandering all over and getting lost on the Island. It is a place to quickly get sidetracked with the beauty.

We walked everywhere! The Island has such a crazy diversity when it comes to the beaches and geography. White sand beaches, rocky beaches, and beaches made completely out of shells. Every place we went to was unique. The highlight was a small cove right outside Oneroa with starfish dotting the rocks all over and natural rock arches climbing out of the sand. Unfortunately, I didn’t get to go on any wine tours, which Waiheke is really known for, but I’ll be back to check those out.

We took the cheap Island bus to explore, about $5 all day, but wait times are long per stop. Seems like a perfect place to rent a scooter as well, especially if you want to go vineyard hopping.

TIP: Make sure to talk to your hostel or go to the ferry website; you will most likely save money on a ferry ticket that way.

Back in mainland Auckland, you have another hidden beach escape just a 30-minute drive from the city, Piha Beach. After a snaking drive through rolling hills lined with trees, golden reeds sway in the breeze, and the crisp ocean air greets you as you pull up to the sparkling black sand beach.

Hike up “Lion Rock” to get a bird’s eye view, chillax on the beach, or walk along the outskirts and explore the unique cliff-lined shore with pools of vibrant ocean life.

High up above Auckland’s cityscape is Mount Eden, topped with long grass, an interesting crater, and some of the most stellar panoramic views in all of the region. Bus or walk up there, bring a picnic, and spend the day relaxing or reading a book on the mount. It’ll be an excellent way to see Auckland in all its glory.

Places to visit in Auckland: The Harbour

Back in the Central Business District of Auckland, or CBD, I noticed a pattern that was happening. I was naturally gravitating to the harbour. The white flapping sails of the boats coming in and out of the port, the seagulls soaring on a light breeze, and the bright green water.

They do call it the city of sails, after all…

Every time I was in Auckland at some point during the 10 months I was in New Zealand, I would always end up here sometime during my day, whether it was to grab a pint or just walk around. There are some fabulous and sometimes expensive places to grab a bite to eat. But, sitting there staring out at the green glass coloured water and watching the action while enjoying fresh seafood — simply amazing.

What about the city, though? Inside the business district of Auckland, there is still plenty to be seen. I was walking around one morning trying to find a unique coffee shop to feed my caffeine addiction when I stumbled into an old warehouse district. Every inch of concrete in this place was covered by sponsored graffiti, and the artwork was gnarly. Each section was divided up for different graffiti artists. The art on the walls was stunning and intricate, colourful and explosive. I have always been fascinated by legitimate graffiti art, but I had never seen anything like this.

The city is truly one of the most colourful places I’ve seen, promoting artwork and imagination all over. So cool.

Put it simply, Auckland is a fantastic city. The weeks there were a blast, and I’m so glad I gave it another shot. If you stay at any hostels inside central Auckland, don’t judge the City of Sails by Queen Street. Auckland is so much bigger than you think; you just have to wander. So if you are looking for places to visit in Auckland, take my advice – get the hell off Queen Street!

Where To Stay In Florida During Spring Break

10 Unique Places To Visit In Perth

10 Unique Places To Visit In Perth