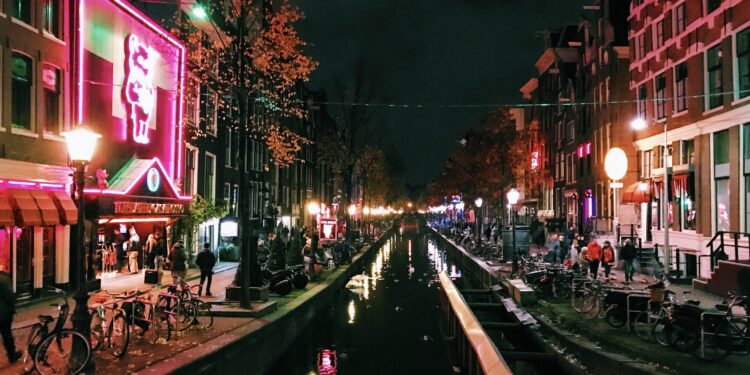 Offering everything from relaxing coffee houses to exhilarating dance clubs and musical performances, the central Amsterdam area located around the Central Station and Leidseplein is where tourists and natives alike go to experience the unique nightlife in Amsterdam. Unfortunately, Amsterdam’s nightlife often flourishes only very late at night, and tourists are surprised to see that nightlife entertainment venues remain quiet and even deserted until after ten o clock at night or even later. However, once the fun begins, it begins intensely and lasts throughout the night, well into the wee hours of the morning.

Nightlife in Amsterdam: The clubs

Night clubs in the central area offer everything from quiet, transcendental Asian themes and music to the latest pulsating techno and house rhythms pumped out by international DJs and performers who flock to Amsterdam knowing that it is an entire city of nighttime energy. The nightlife in Amsterdam has a club culture indeed well established. It is familiar to anyone who has experienced the club scene in Berlin and other European capitals. Still, Amsterdam adds its own flavour, a combination of alternating excitement and relaxation, to its nightlife experience. Just remember to dress nicely, as Amsterdam’s bouncers are famous for rejecting scruffy-looking guests. However, even the bouncers at the most exclusive clubs will welcome tourists who look and act as if they belong at the club and are there to enjoy themselves and experience the club’s exclusivity. In addition, it is best to split up into mixed groups of no more than four people, as admission is sometimes denied to single-gender groups or overly large groups at different times depending on the number and gender of guests already admitted. However, in general, it is possible to enter most clubs at some time during their opening hours, although sometimes one must return at a later hour to gain admittance where he had been denied previously.

Even where there is a guest list for an event or, as a matter of club policy, payment of an entrance fee is often sufficient to be granted admission to most clubs. And if your stay in Amsterdam is long enough that you will be returning to one or more of your favourite clubs before you leave the city – or even if not – tip the doorman generously on your way out. It will go a long way in getting you into the club more easily and quickly on your next visit.

Live music venues offering all genres of music, including jazz and dance, are to be found in the central Amsterdam area. These venues feature performances from local as well as international performers. The experience and excitement of featured performances is something not to be missed during your stay in Amsterdam.

The famed coffee houses of Amsterdam are not only places where you can try that which may not be entirely legal at home, but they are also perfect for relaxation after or in between club and music venue visits. Indeed, it is possible to enjoy exotic coffee or tea that has been a specialty of Amsterdam going back to when the Dutch colonies shipped coffee, tea and cocoa back to the homeland. Famed Dutch chocolate and products made with it feature some of the quieter coffeehouses and similar relaxation spots in the central area. The taste of the chocolate remains as a reminder to return to the area by day and buy chocolate and cocoa to take back home.

Nightlife in Amsterdam: The bars

Amsterdam is also known for its bars, which usually serve draft beer and wine. However, enjoyable and relaxing cocktail bars are also to be found in the central Amsterdam nightlife district. Ranging from small and intimate to large enough to welcome revellers with a full-sized dance floor, the bars are open until 3 AM at the earliest, making them an alternative to coffee houses in-between visits to clubs or music venues. In addition, a bar that attracts a local Dutch crowd is a perfect place to see how your hosts enjoy their nights. These bars, known as brown bars for the stained wood and walls that are to be found in most such establishments, feature the best and freshest beer and quintessentially Dutch pastimes such as playing cards. However, be forewarned that Dutch bars can get quite rowdy at times, albeit in an entertaining rather than a dangerous or unpleasant way. And if you leave a “brown bar” or any other drinking establishment after having had a few too many, ask your friends to help keep you in control, as neither locals nor policemen appreciate drunk and disorderly conduct on the streets, regardless of the reputation of Amsterdam as a freewheeling city of entertainment.

While the Leidseplein is the centre of club life, seasoned Amsterdam hands agree that many of the best bars are found in the Rembrandtplein area. It is also known for a handful of Amsterdam’s most famous clubs. The difference between the two areas is that the Rembrandstplein attracts more locals and fewer tourists and students. Still, Amsterdam is far from a large city, and both areas can easily be enjoyed during a night out “on the town”.

That “night out on the town” can also include enjoyable local and world cuisine in larger cafes and restaurants, some of which feature music and dancing as well as food. While Amsterdam is not mainly known for its culinary offerings, the Leidseplein and Rembrandtplein and the surrounding area are perfect for an enjoyable meal before or during a night of intense and exhilarating nighttime entertainment.

So, when you visit Amsterdam, the Leidseplein and Rembrandtplein areas are your addresses for long nights of clubbing and enjoying the unique nighttime atmosphere of Amsterdam. Just one night of this experience will leave you with a lifetime of memories that will draw you back to the city and its nighttime attractions whenever you can travel again.

Top 10 Things to Do in Bhutan