Munich: The World City with a Heart, Prost! 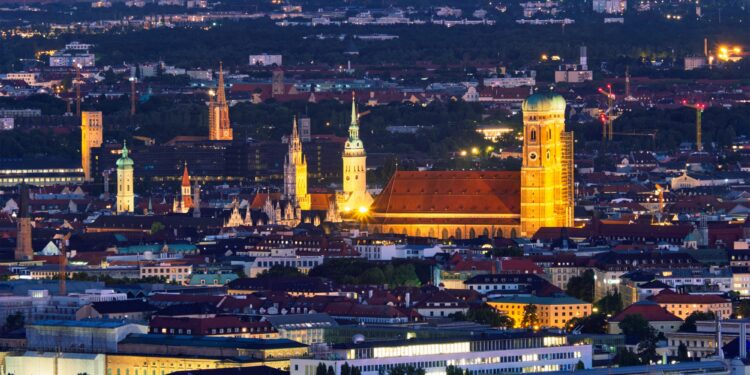 Hey there, it’s me again, and I am back from my European travels! I flew into Heathrow airport to stay in London for a few days, where I then travelled to Amsterdam, Munich, and back to London. This entry, however, will only be about my stay in Munich, Germany.

My boyfriend, Elliot, and I flew into Munich Thursday afternoon from Amsterdam; we had a layover in Copenhagen, Denmark and met his friend Martin in Germany Thursday around nine p.m. We then had to take two trains to Martin and his girlfriend, Nicki’s apartment. All of the train signs and basically EVERYTHING in Munich is in German, so we were very fortunate to have them let us stay with them and guide us around; otherwise, it’s safe to say we would have been screwed. So instead, we talked and drank beers and eventually fell asleep.

We woke up around 8 A.M. and grabbed coffee and pretzels from the bakery downstairs for breakfast. We then took the train to see Rathaus-Glockenspiel, a big clock in the centre of Munich. At 12, the tiny figures on the clock move around, but only at 12, so it was something we had to see. After we walked around the little outdoor market nearby, they have all sorts of cheeses and fresh fruits. We then walked around the area and checked out a few nearby churches.

Next, our friends showed us this strange canal that under it had almost a riptide effect on which several people were surfing! We were hungry, so we walked thru the Englischer Garten, where we grabbed bratwurst, potatoes and beer. We ate and drank near this large Japanese type structure which was playing live music. The weather was great, and the beer was so good! After leaving this beer garden, we grabbed ice cream in the park and headed over to another beer garden.

The second beer garden was very crowded. We were smashed on a bench with a bunch of other groups of people. We met up with two of Martin and Nicki’s friends. The other people at the beer garden were becoming a bit agitated by how crowded it was. There was a bit of an altercation between one of our German friends and a woman. For dinner, we went to a student bar/restaurant; I believe it was Steinheil 16. The prices were cheap, and the food was great! You got so much too! Elliot ordered the schnitzel, and I had this pasta with meat and sauce; we were eating authentic Bavarian food, which was delicious. We also had some beers then headed back to the apartment.

*Prost! – Cheers! Every time we had a drink, we would clink the bottom of our glasses and say, Prost!

We had an excellent breakfast with potato rolls, pretzels, eggs, and these cold brat-like sausages. They reminded me of cold hot dogs, except I liked them, and real hot dogs skeeve me out. We then headed to Nymphenburg Palace. It was so pretty, there is a large pond and a bunch of interesting statues. We then took a train to the bustling market area. We went to check out the Hofbrau Haus, we were hungry and wanted to eat, but all of the restaurants were very expensive in this area of town. We took a train one stop away, and the food was instantly cheaper!

Whenever I travel, I try not to eat in the tourist areas because they obviously will rape your wallet. We ended up at this quaint place. I had a schnitzel this time, and Elliot had duck with potato dumplings and red cabbage. It was so much food! We then wanted to grab ice cream at this place, Der Verrückte Eismacher, or the crazy ice cream maker, but the line was too long, and we had to meet some people to go bowling! The crazy ice cream maker. It has flavours such as schnitzel and bratwurst, even!

We grabbed ice cream next door, which was vegan and organic, I enjoyed it, but no one else did… We all then headed over to this bowling arena with like 60 lanes. Afterwards, we went to a hookah lounge where I proceeded to drink since I do not enjoy hookah. We then returned to the apartment, where we were all a bit drunk and ate those cold hot dog things. Elliot and I decided to trick his friend Martin and asked him if he had received an e-mail from their teacher about joining the pen 15 clubs. Martin didn’t catch on at first because we had convinced him it was a financial club. We had to print our boarding passes because our flight back to London was the next night; I am not sure when I passed out….

Our last day in Munich

The following day we had pretzels once again (I ate SO many pretzels while in Munich, and I rarely eat pretzels.. they were just so good and inexpensive!) After that, we visited the BMW museum because it is very close to our friends’ apartment. You can walk around most of it for free, so we did this and jumped into a few of the cars until I almost got us in trouble because Elliot dared me to ask a worker for directions while sitting in one of the cars… Afterwards, we walked over to the Olympic Park, where we hiked up the pretty tall hill to get a fantastic view of Munich. There is a pond in the middle where you can put your children in these strange bubbles that float in the water (a bit claustrophobic and 7 euros. fun.) We then enjoyed a bratwurst on a bun while soaking in some sun rays lounging in the park.

Afterwards, we went for our last German beer at the Hofbrauhaus. I tried to have another pretzel, but this one was hard. The waiter informed us that is how Hofbrauhaus makes their pretzels… I was disappointed as hell; I was expecting a lot, I guess. The beer was good tho, and the place was HUGE! We chose to sit out back on the patio.

Afterwards, we had to head back to the apartment and get our stuff to London. We then headed to the airport, passed thru security and flew back to my favourite city on earth, London. When I came to Munich, no one checked my passport since I travelled from Amsterdam (if you travel within the EU, they sometimes don’t check passports).

Walking around Munich, one can see why they call it the world city with a heart; it is easy to see that it is a city, but it is still so much like a village. It is beautiful, and the culture is so exciting yet fun 😉 hello, beer gardens! If you visit Munich, I would suggest obviously doing so during Oktoberfest or during the Spring/Summer months because the beer gardens are relaxing and enjoyable. We did not have the best experiences with the waitstaff in restaurants, however. I am not sure why but most of the time, they knew that Martin and Nicki spoke German, so they would only speak German and not English. Therefore I had to have Nicki order for me in restaurants most of the time. Munich is great but in my opinion a bit difficult to get around if you do not understand German, so I suggest bringing a dictionary maybe. Besides this wonderful city, there are a lot of other regions to visit if you’re planning a trip to Germany.

The Best Places to Visit in Colombia

One Week in Egypt: Not A Typical Tourist Destination

One Week in Egypt: Not A Typical Tourist Destination