Why You Should Visit Myanmar Now 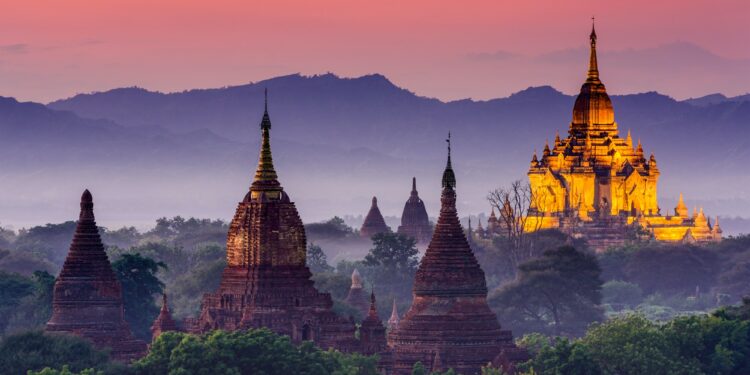 Myanmar is fast becoming Southeast Asia’s most sought-after destination. After 50 years under a restrictive military regime, recent pro-democracy reforms have positioned the country, known formerly as Burma, at the cusp of a significant time for change and development.

On my recent tour of Myanmar, I was astounded by the fantastic cultural touring, picturesque villages, gorgeous natural settings, and warm, hospitable people eager to share their stories and show off their country to the outside world.

Scheduling note: Myanmar’s high season now stretches from October – March. Therefore, we recommend booking a year in advance for travel during these months to secure the most deluxe hotels and Irrawaddy River cruises.

The terms “bling” and “Buddhism” may seem to be opposing forces, but at Yangon’s iconic Shwedagon Pagoda, the two come together magnificently. Myanmar’s holiest Buddhist shrine, said to house eight hairs of the Buddha, rises to 321 feet, every inch covered in pure gold. But that’s not all—the top is crowned with thousands of diamonds and rubies, capped with a staggering 76-carat diamond bud.

While Shwedagon is spectacular, the scores of smaller shrines and pagodas surrounding it showcases a range of unique devotional styles. Here, a monk stops for a quiet moment in front of an array of Buddha images, all taking the pose called “calling the earth to witness.”

Before visiting, you may want to determine the weekday of your birth. The zodiac here, taken quite seriously by Buddhists in Myanmar, is based on the day one was born. Wednesday morning and afternoon are considered two different days, so the time of birth is essential for those born on that day. Here, and at other temples, you will find a unique pagoda platform corresponding to your day of the week.

The timeworn buildings of Yangon Street

The cityscape of Yangon is notable for its wide boulevards, lots of trees, and its heritage architecture, built in the day when it was colonial Rangoon. These lovely buildings, some crumbling, some lovingly restored, lend a vintage look to the city.

A female monk passes through the colourful prints of the fabric stalls at Yangon’s Bogyoke Aung San Market. Originally christened Scott’s Market in 1926, it was renamed after independence for the assassinated General Aung San, whose daughter is the celebrated Burmese activist and Nobel Peace Prize winner, Aung San Suu Kyi. The market is popular with both locals and visitors to change money and shop for fine and costume jewellery, antiques, clothing, handicrafts, and much more.

Ananda Temple, one of the largest, best-preserved and most exquisite temples in Bagan

The highlight of any tour through Myanmar is breathtaking Bagan, where over 2,000 magnificent temples and pagodas rise from the plains to create a fantastical landscape. It’s hard to imagine that these are just a fraction of the 10,000 structures that stood here before the kingdom’s fall in 1287.

It would take many months to visit all the temples and pagodas, so our tours focus on some of the most significant. One of these gems is the Ananda Temple’s architectural masterpiece, one of the largest, best-preserved and most exquisite in Bagan.

The colourful morning market at Nyaung U

The morning market at Nyaung U just outside of Bagan is a riot of colour, from the variety of fresh produce for sale to the clothing worn by those selling and shopping. Villagers from around the region converge at this authentic market where business is conducted as it has been for centuries. Merchants often sit on the ground surrounded by their wares, which they weigh using an old-fashioned hand-held balance scale.

A local child sports the traditional application of thanaka

The market is an excellent place to admire women and children (and the occasional man) with their faces adorned by a conventional application of thanaka. This paste is made fresh from groundwood and applied daily as a cosmetic, sunscreen, and skin treatment. It is said that the Burmese people have been wearing this distinctive look for millennia.

The sunsets over Bagan

One of the best parts of a private tour is travelling with a well-connected guide. My guide in Bagan secured unique access to an otherwise empty temple rooftop. There, away from the crowds jockeying for position on the “official” sunset temple, we basked in an almost magical serenity and calm as the sunset over Bagan’s plains of temples.

Novice monks line up for their mid-day alms

The Mahagandhayon Monastery, near Mandalay, is the largest Buddhist monastery in Myanmar. With over 1,000 monks in residence, it makes for a superb place to witness the monks lining up for their mid-day alms.

Boys sometimes spend their summers as novice monks, learning the tenants of Buddhism, in a very Burmese take on summer camp. Here, the novices in the white line up with ordained monks to receive their midday alms. Like kids anywhere, some find it impossible not to talk to their neighbours while waiting in line.

My tour of Myanmar ended in the charming Inle Lake, a beautiful region where gardens float, houses stand on stilts, and the main form of transportation is the moto-gondola. Here, the engines are turned off for a quiet entrance to the lovely Inle Princess Resort.

The Inthar Heritage House, aka Inle Lake’s “Cat Café”, is a lovely traditional stilt building surrounded by gardens growing flowers and organic vegetables. A small art gallery on-site promotes the work of local artists. But the true highlight here (at least for feline fanatics) is a visit with the resident Burmese cats, once nearly extinct in their indigenous homeland. Today, a small population of these friendly and sweet-natured cats enthusiastically welcomes visitors to their home on the lake.

My most memorable meal: A bowl of steaming fresh noodles slathered with a thick soybean cream and topped off with chilis and spices

Burmese cuisine is unique, with influences from neighbouring Thailand, China, and India. Dishes like the spicy, fermented tea leaf salad are popular, as is local seafood with green chilli curry. In Yangon, an assortment of international restaurants tempts with delicious offerings.

But, for me, the most memorable meal was at this simple shack at Inle Lake, where women from the Shan ethnic group serve their popular breakfast dish called Tohu Nuway. It’s a bowl of steaming fresh noodles slathered with a thick soybean cream and topped off with chilis and spices. Divine!

7 Places to Visit in Brunei