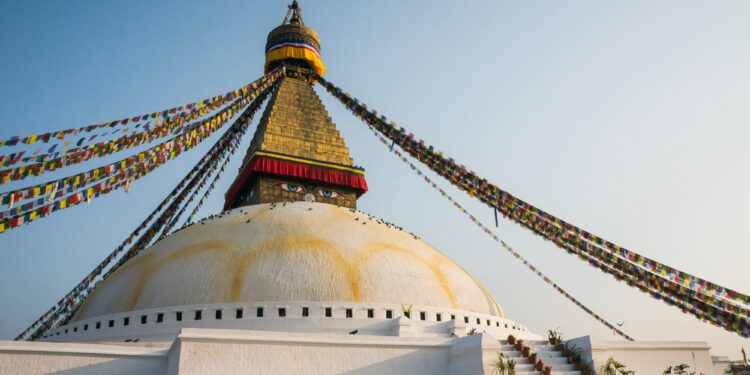 Nepal occupies a tiny size in the world map, gently nestled between the two giant nations, China and India, situated in the South Asian region. However, it is one of the top travel destinations for backpackers and travellers who wonder when is the best time to visit Nepal. How can one of the most visited countries in the world only be favourable for specific months? To me, Nepal is a destination worth visiting all year round.

In Nepal, the winter season falls between December and February. The winter days are generally pleasant. However, the morning and the evening/night are cold, and in some places, it can even reach the freezing point during that time. Amongst these three months, January is the coldest of all, with the high hills and mountains witnessing rough weather.

Since the weather is cold, foggy and cloudy during winter, trekking in higher passages like Cho La, Renjo La, Larke La etc., is tricky. The recommended treks during the wintertime are the lower Everest region, Langtang valley and Gosainkunda Trek, Annapurna Circuit Trek, and some others. You should bring warm clothes while trekking to these places during the cold.

Where to travel during wintertime?

One of the best options is to explore wildlife in the Southern plains. Chitwan and Bardiya National parks are popular. One can take a closer look at elephants, one-horned rhinos, Bengal tigers, birds, crocodiles and other protected animals. Hiking around Kathmandu valley and Pokhara is another excellent option. The weather is pleasant, and travellers can witness clear panoramic views, and the trails are comparatively quieter.

Maghe Sankranti (in January), Lhosar (a new year celebration among Sherpa People and Tibetans, celebrated in February), Yomari Punhi (festival of Newari people, in December) are some of the important festivals that fall in the Winter season.

The spring season, commonly called the season of rhododendron, falls between March and May. While trekking to a higher altitude, you can witness the blooming rhododendron forests. Then, the temperature rises, surpassing winter and the weather is more stable. The average rainfall in spring is 10-70 mm. The exciting thing is there are more than 30 species of rhododendron in Nepal that differ in colour (from red to pink to white).

Where to travel during the spring season?

The spring season is considered pleasant to trek through Larke pass in the Manaslu circuit region. Thorang La in Annapurna Circuit region, Renjo La in the Everest region and many other high altitudes in Dolpo, Kanchenjunga regions. Therefore, it is an ideal time for expeditions and high altitude trekking. Bardiya is the spot for tiger observation via jungle safari. So even though it’s hot during that time, it is likely to see tigers.

Festivals from March to May

In Nepal, people celebrate many “New Years”, and Nepali New Year in April is another important one. One interesting thing about the Nepali calendar: It is 56 years ahead of the English Calendar (AD). Different cultural events and parties are organised in almost all parts of the country, but major ones in Pokhara, Kathmandu, Biratnagar, and Dharan.

An important festival of the Nepalese people and specifically the Hindus. It is celebrated on the 13th night (waning moon) and 14th day of the month Falgun (i.e. March in English Calendar). The festival is significant in terms of self-observation, fasting and digging into the unknown to explore ourselves. Pashupatinath temple receives hundreds of thousands of visitors during the festival, and naked holy men are the centre of attraction. Marijuana is unofficially legal on the particular day of Maha Shivaratri.

The festival of Buddha Jayanti marks the auspicious occasion of the birthday of Lord Buddha in May.

Monsoon season is the period from June to August. The climate is generally warm, wet and humid. The southern part of Nepal (Terai) is very hot in the monsoon season.

Where to travel during Monsoon Season?

One can do a city tour around Kathmandu and Pokhara during this time of the year. Also, short hiking around Kathmandu valley is a great option to go for. Trekking is doable during the Monsoon season, but it will surely be adventurous because of heavy rain, poor visibility, and cloudy weather.

But how about going for the daring travels in the off-beaten trails? The beauty is serene trails with less or no travellers. An expedition is not doable during monsoon time.

Yarthung Horse festival is celebrated in the Manang district in June.

This festival is celebrated in August. Janai Purnima is the full moon day which marks the bond of purity and security.

Gai Jatra is celebrated in August by the Newari people in Kathmandu valley. The festival commemorates the deceased persons of the family during the calendar year. People are disguised as figures of cows and are seen with different colour paintings.

Teej is a significant festival of women, celebrated in August/September. Lord Shiva is worshipped on the day of Teej. The women take fasting, gather, sing, dance and pray for the longevity of their husbands if they are married. If not, they pray, wishing to get the ideal husband soon.

Lord Krishna is widely considered the 8th incarnation of Lord Vishnu. Therefore, the day of Krishna Janmashtami marks the birthday of Lord Krishna. Dancing, self-observation, fasting, praying, and worship are some of this festival’s activities. There are many Krishna Temples around the country, but the major ones are located in Kathmandu and Patan.

September until November is considered autumn in Nepal. It is also called the post-monsoon season as the atmosphere is clean and the skies are blue with significantly fewer or no clouds.

Where to Travel during Autumn Season?

Autumn is the best time for trekking. Clearer skies mean certainty of seeing the mountain vistas and beautiful landscapes from a far distance. Thorang La in Annapurna Region, Gokyo Ri in Everest Region or Larke La in Manaslu Region, or other trekking routes are pleasant surprises.

It is also a fantastic opportunity to go for bird watching and jungle safari, mainly in the southern part of Nepal. One can choose to travel to Lumbini, the birthplace of Buddha as well. Generally, the weather is hot and humid in that part of the country. Still, during this time of the year, the temperature is moderate.

The autumn season invites significant festivals along with the blue skies and pleasant weather.

Dashain is the most significant festival of Nepalese people following Hinduism. The festival of Dashain falls in late September or early October and lasts for 9 days. People worship the warrior goddess Durga, who is believed to protect good people fighting the demons. Offerings of animals (sheep, chicken, buffalo, goats, fish) are made to please Gods. People receive blessings from elders, and it is a moment of togetherness among family members who have been far away the whole year.

It is another important festival of Hindus celebrated after two weeks of celebration of Dashain during late October or early November. The goddess of wealth, Laxmi, is worshipped with dogs, cows, and crows in this festival. Similarly, another aspect of this festival is to mark the bond between siblings. The sisters put tika (a mark worn on the forehead) on the brothers’ forehead, praying for their longevity and progress.

Chhath is an exciting festival that celebrates the Sun’s presence. It falls after Tihar in the month of late October or early November. The markings of this festival include intense fasting, bathing in the ponds/rivers, prayer offerings, prayers to the setting and rising Sun.

If your question is what’s the best time to visit Nepal, my answer would be that it depends on what kind of travel you want. It is not just limited to one or two seasons but the whole year-round.

Top 10 Free Things To Do In London