What To Do In Baltimore During A Mother-Daughter Weekend 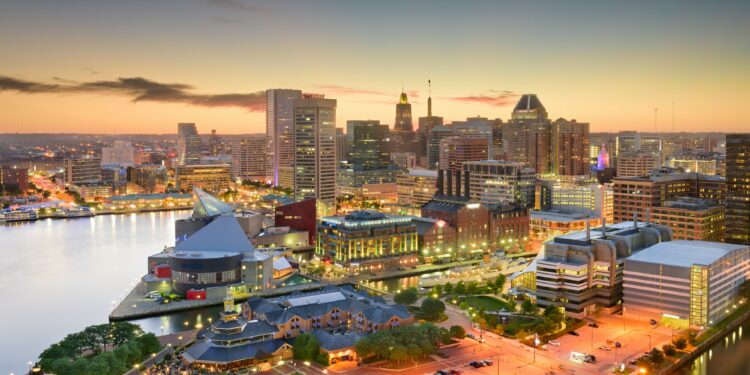 I headed down to Baltimore for Columbus Day weekend for a Mother-Daughter trip to attend the Digital Family Summit. We had a fantastic time, so I wanted to write about it so that you also know what to do in Baltimore with your family.

We stayed at the Baltimore Hilton, conveniently located next to Orioles Stadium at Camden Yards. For sports fans, this is a perfect place to stay. It is walking distance to the Orioles’ and Ravens’ stadiums, right next to the light rail station, about a 10-minute walk to the Inner Harbour. The Orioles didn’t make the playoffs this year, but the Ravens were in town. I guess visiting teams stay at the Hilton (good to know!) because we watched as a crowd of out-of-town fans cheered for the Green Bay Packers as they boarded the bus for the game.

As an added bonus, Saturday morning was the Baltimore Marathon. We watched from the hotel room (city facing). We cheered those approaching the finish line from the conference level or outside the hotel.

The rooms were OK, although they could use some spiffing up. Luckily the conference picked up the tab on the WiFi, especially since cell coverage, at least at the front of the building, is terrible. Parking is also expensive but convenient as you can self-park, but there are other lot options nearby.

First and foremost, we were there to attend the Digital Family Summit Conference. But we also had free time to take in some of the attractions around the Inner Harbour, including:

Maryland Science Centre – this hands-on science museum covers three floors with many permanent and special exhibits. We didn’t have time to see the special Mummy exhibit. Still, we were impressed with the activities in Newton’s Alley, SpaceLink and the giant dinosaur exhibit.

Chessie Paddleboats — this was top of my daughter’s list (behind breakfast at Miss Shirley’s, but more on that later). It was more fun for her than me as they are not the easiest to pedal, hard to see around the dragon’s neck, and awkward to steer (especially in the bulky life vest). Still, it gave us a different view of the bay, and she enjoyed it.

National Aquarium – the very best thing to see in Baltimore is the aquarium.

Baltimore Water Taxi — unfortunately for us, the Inner Harbour cruises closed the day before attempting to take one. To still get a feel for the harbour, we decided to explore by water taxi instead. That was also out since Fort McHenry was closed due to the government shutdown. Still, we took a cab over to the historic Fells Point area and then hopped around to other harbour spots.

Fells Point — we also took a half-hour stroll through the Inner Harbour and into Fells Point for dinner on Sunday, exploring the cobblestone streets of restaurants, bars, and shops.

Riptide by the Bay – we had a great time cracking crabs and enjoying the local cuisine at Riptide by the Bay in Fells Point. The front bar was filled with enthusiastic Raven fans and featured live music. Still, the back dining room was quiet enough to enjoy conversation and food. The waiter gave a great demo on how to break down the crabs. Turns out my adventurous eater was a bit (by that, I mean a lot) grossed out by the “guts,” so it became my job to clean the bodies while she tackled the claws. Between us, we were stuffed on a dozen crabs, a bucket of fries, and corn on the cob.

La Tasca – before dinner, we met up with a cousin. We snacked on some tapas at this harborside Spanish tapas restaurant. Although we only sampled a couple of treats, the location and atmosphere were perfect. The food had an authentic feel. Much better than some of the chain restaurants in the Inner Harbour.

Miss Shirley’s – yes, I’ve saved the best for last. I have to say it will remain our all-time favourite and must-visit Baltimore establishment. We’ve only gone for breakfast, but the lunch options look equally tasty with a southern flair. I tried the white chocolate and chocolate chip waffles with chocolate sauce (so decadent and worth every calorie!!), while my daughter had the raspberry and white chocolate pancakes. Together we shared a side of applewood smoked bacon, cooked perfectly crispy. My mouth is watering just thinking of it. Highly, highly recommended.

What a lovely time we had!

4 Top Hotels In Munich Worth Staying At

A Long Weekend In Prague: Best Decision Ever