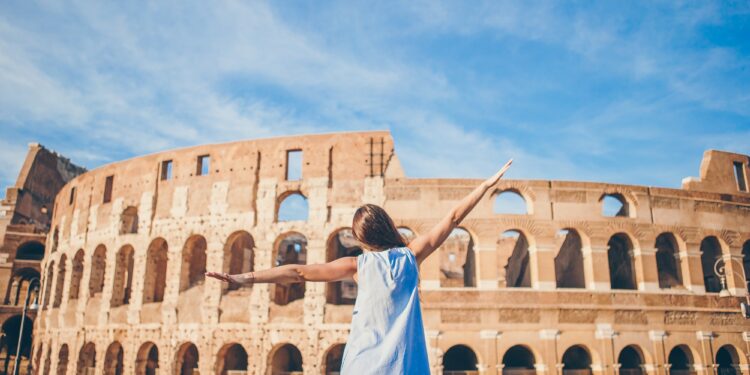 A week after Tartu, I was bound to Rome for the first time and one of the few destinations I knew no one local. So this meant booking a hostel, which I did on a Friday afternoon, hours before checking in at the gate. I took the Modlin airport, which is slightly further from Warsaw but caters to Ryanair flights. So let me give you more details about my solo weekend in Rome.

Starting my weekend in Rome: On the way to my hostel

I arrived very late at Rome’s Ciampino airport, where I was lucky enough to split a taxi with a couple heading townward. However, it did turn out on the way that when the driver said he accepted cards, he meant I should later get out of the cab and take out cash at an atm. Nonetheless, he more than made up for it with a conversation about Italian girls.

The hostel I had booked was recommended for its nightlife feature and organised pub/club crawls. When I got to the door at midnight, I could tell this was true, as the entrance had more traffic than an average Dublin club. Checking in, I also met Michael, also born on the 5th of November. We exchanged a resonating high five.

That night I went to sleep, as I had been tired from having worked all day plus the travelling, and decided to wake up early to discover the city’s treasures. And so I did, the following day off to that big round thing, which had a far too long line for me to bother to stand-in. Instead, it got into the Palatino/Fori Romani right next to it, which was within minutes. It was exciting to see the ruins and enjoy a tranquil walk without many people there. If I remember correctly, it’s pretty much in Roman Holiday, when it’s portrayed as empty.

After walking for 2 hours from one broken piece of Roman architecture to another, I got to a spot where I could clearly see the Colosseum. I got asked by a stranger if they could take a photo of me with my camera. Otherwise, I probably wouldn’t have too many pictures of myself, so thank you, overly enthusiastic American girl; much obliged.

On the way back to the hostel, and after about 15KM of wandering after the Fori Romani, I first stopped at a restaurant’s outside table to try the best sea muscles I have ever had (and the first that did not upset my stomach), as well as a fantastic Tiramisu. Also noteworthy was the waiter’s attempt at speaking all the languages of his guests and pulling off minutes of Japanese rambling, which seemed to be correct, as the Japanese tourists did not answer back in English. Although maybe they couldn’t speak English, which would’ve been a comically awkward situation.

And then, just before heading back, a quick stop at the National Museum, which was not only much emptier than the Fori Romani but was quite literally empty. Four giant floors with no one on them on a Saturday afternoon. Anyway, surprise aside, it was great to see that my urge to delve into ancient Greek and Roman philosophy a couple of years ago had paid off, and I could recognise a few sculptures. The highlight was the marble works and the giant mosaic paintings on the top floor. Not so enjoyable was the rich coin collections downstairs. Still, one has to be a numismatist to appreciate it.

Out for a drink (well…more than one)

Back at the hostel, I met Claudia, a freelance journalist from Milan, on a work trip to write an article for Vanity Fair on meeting travelling people. Also staying with us in the dorm room was Glauco, a Sao Paolan living outside San Marino and visiting Rome for the weekend. Together we decided to join the club crawl that evening.

After a slight altercation with the bar lady, who refused to serve whiskey without mixing it with coke, the evening did not begin positively. The reason I still don’t understand. The group grew bigger, and eventually, we reached the inevitable and got a few Americans in there, who turned out to make better debaters than their countrymen I met in Istanbul. After the usual ‘I am American, but I’m not like the others’ conversation, the whole group was off to the first bar. Then the next, and then another…. at the last one we arrived in some fancy-looking club, with gogo dances and 10 euro drinks. One thing to note from this weekend in Rome was the unusually high flirting levels in Roman clubs, or maybe that was just me being very drunk.

Returning to the hostel, I encountered a highly inebriated guy sitting and facing downward on the bus. Naturally, though the bus was full, he created a perfect radius of one meter around him, with people hoping not to enter it, especially when the driver hit a pothole. What made it even better is that a random Italian dude started shouting at him, later to be translated to us, not to embarrass the Italians in front of them damn Americans.

Anyway, leaving the bus with the angry Italian, we got back with the anticipation of going to the Vatican the next day to see Papa give a Pre-Easter speech. We overslept it, however, by a few hours. We then decided to skip the Vatican and just go for a walk, which led through the riverside at one point, and later a reunion with the American guys. Claudia had me drinking more espressos than I have ever drank, but I made up for it by showing me the city.

After more social stuff that evening and discovering the perfect rooftop place upon the hostel, we decided to go see- the next day, of course- the Vatican after all. Arrived there with a long queue again and played the role of pilgrims, as their lines were shorter. However, it did not go down well that I stood in line with a pint bottle of Heineken. After chugging it before going through the metal detector, we entered the square. And honestly, though big and pretty, it did not leave me in awe. Maybe, however, because I was entertaining myself by making Catholic jokes.

Ending my solo weekend in Rome

I returned to the hostel to pick up my bags, as I was flying back in a few hours. Said my goodbyes and left with a feeling that my expectations of the city had been exceeded. I would like to have a few more trips to Italy this year.

A Long Weekend In Prague: Best Decision Ever

What To Do In Austin In 48 Hours: A Local's Tips