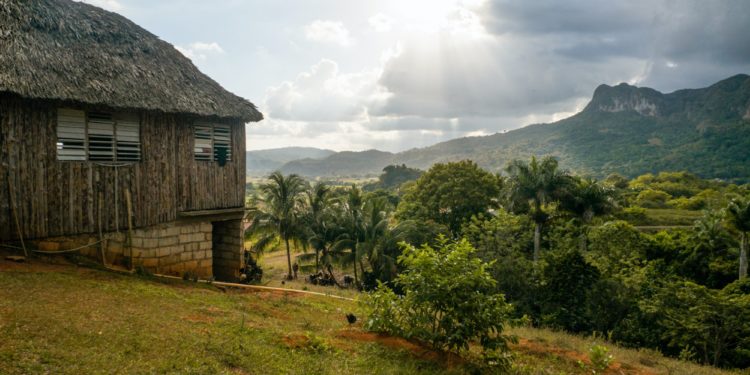 Cuba has a relatively new climbing scene. Most of the action happens in Viñales, about 3 hours from Havana.

The legality of climbing in Cuba used to be complicated and confusing. Officially, access to the mountains was only allowed with the state guides, but in reality, police didn’t cause too much trouble to the foreigners, but they could cause problems to the local climbers.

If the police were in the mountains, Raul Reyes, whose plantation is on the way to most of the climbing routes, would call the climbers with a tip-off and stay away that day. He is very respected by the local climbers.

These days, the state finally accepted climbing as a sport (small steps, but they even started thinking about indoor building places), and local climbers have been asked to help develop the sport further. So I guess climbing making it to the Olympics finally caused the change.

There is still a scarcity of bolts – so there is only that many routes there. If you want to help, there is info on the cubaclimbing website.

Getting from Viñales to climbing places

Mogotes are just north of Viñales to walk there in 10 to 15 minutes from the main street.

Look out for Raul Reyes Finca and take a turn there: to get to most of the climbing routes, you have to go through Raul’s tobacco plantation.

Raul also has a restaurant where you can eat, drink, relax in a hammock and meet fellow climbers if you want to find a climbing partner for a day. He is likely to come over and introduce himself to you. I guess he is still treating the climbers as those young kids in trouble he used to protect not so long time ago.

The rest of the walk to the climbing spots is pleasant and relatively short, with excellent views.

The mogotes rock is hard limestone. It’s pretty spiky, so that you will get a lot of micro-cuts and micro punctures. But it’s an excellent rock to climb on.

I had two days of climbing. We had eight climbers (and two instructors) on the first day, and the routes were relatively easy 4s and 5s in the Ensenada De Raul area. After that, we had six different routes to try: good warm-up and introduction to mogotes.

And then, to finish the day off, we had beer and tacos back at Raul Reyes farm and went for dinner and churros to the town centre.

The instructor and I were just on the second day, and we headed to the Cueva Larga. The routes there are between 6a and 7c, and there was a group of people working on some of the more challenging routes.

The light in the cave changes often, and sometimes the same route feels much more challenging because you can’t see the holds (that is mostly true to the left wall, where the harder routes are).

One of the 6a routes (Chipojito) had pretty cool features, moving from one another side of an extensive secondary formation tufa, traverse in the middle of the route, a nice cave towards the top to have a rest and a tiny, tiny overhang-y bit. Nice mix. It’s called a “small lizard” because when you work the first half of the route, you have to stretch your limbs to reach both sides of the tufa – it makes you look like a lizard. If you are petite, you may not be able to stretch that much, and then you have to work from one side of tufa to another – quite tricky.

One 5 or 6 level route ends up in the tunnel/cave you can walk to the other side of the mountain (you’ll shout ‘slack!’ lots). I can’t remember its name but someone there should be able to help you to find it.

The last route of the day was “Bititi” outside of the cave (5-minute walk to the left, Jagueyana crag), and it was a vicious slab in the upper part (my fingers skin was giving up by then as well) with sparse, one-finger pockets. It was super tiring for a slab, and I have never pushed from my legs so much in my life:)

How to get to Viñales

You can get there by Viazul bus (that’s what I did), a Cubanacan bus or collectivo taxi.

Viazul buses depart from Havana at 9 am and 3:30 pm. You can book tickets online (at least a week before the travel). Don’t forget to print out the ticket and be at the station half an hour before – ignore the queue to the ticket office at the entrance to the station, go a couple of stair steps up to the waiting room and there you’ll have someone to exchange your printed voucher for a ticket.

There is a good write up of travelling by Cubanacan and collectivo taxi on Nomadicbones blog (they also provide a link to Cubanacan buses info).

Casa particular, is the best way to stay in Vinales (and in Cuba in general). It looks like every house in Vinales has turned into casa particular, so you won’t have a problem finding somewhere to stay. You can book before you go (Airbnb or many websites can provide you with a phone number or email).

There will also be a large group of “jineteros” at the bus stop when you arrive: they will try to get you to pick their casa – they are very insisting and didn’t care when I said that I have already booked my casa. They only lost interest when I said I had already paid (little lie, but it worked wonders).

I have asked my climbing instructor if he could find something for me, and he did find a great place (charming hosts and the location was perfect: close to the central plaza but on the way to the mountains).

I had contacted one of the local climbers before I went to Cuba. Landry has been climbing in mogotes for 14 years, and he knows every single finger pocket there. He also bolts routes and maintains some of them. He and four other guys are the core group that works together on maintaining and promoting climbing in Vinales.

I didn’t have to worry about getting equipment to Cuba (he has ropes, harness, shoes etc.), so I just took my shoes and my harness with me (and some extra stuff I wanted to donate).

Inexpensive And Free Things to do in Cologne, Germany