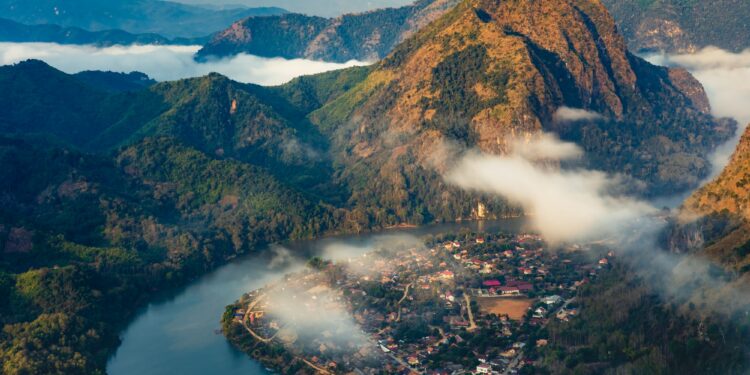 I made a last-minute decision to make Laos my second travel destination when plans to go to Myanmar came to a halt because of visa issues. With very little knowledge about the country, I quickly packed up from Thailand, booked a 3-day bus and boat trip that would take me along the Mekong River and left behind my favourite place in Thailand.

But I’m pretty glad it happened that way. So many travellers I’d met in Thailand had spoken about missing out on Laos because they said there “wasn’t much to do.” So as I arrived with little to almost no expectations, I ultimately was blown away. They were right about that one, not because there was so much to do but because of how beautiful the country was.

I’ve had the most incredible time in Laos, see some of the most picturesque landscapes, and met some great people I hope to revisit one day. So here’s a cut-down, blog-friendly version of the 15 days I spent travelling around Laos.

The 3-day bus/boat ride to Laos ended with being dropped off in the ancient town of Luang Prabang. The two days spent getting there via boat was better than I imagined – no seasickness. I made some incredible friends on the ship, and the views were pretty spectacular too.

Watching the sunset as our boat was stuck in the river for an hour, unable to move, we eventually got pulled along to the mainland by another boat. With views like this, I didn’t mind being stranded.

Get on your bike and explore!

On my first day, me and Antonia I, who I’d met on the boat to Laos, decided to cycle around the town and explore. Luang Prabang has been a designated UNESCO world heritage site since 1995. Here’s a typical street where local Laos live.

Just having a wander around the town, you’ll find interesting little gems. For example, we stumbled across this cute little art shop. Unfortunately, my pictures don’t do the artist any justice!

After cycling around for 2 hours in 30+ degree heat, stopping off for an ice-cold drink was very much needed!

Wake up early for sunrise

Watching the sunrise didn’t work out for me – it was a very misty morning. It reminded me of a cold chilly morning back in England!

If you plan on watching the sunrise from Mount Phousi, you’ll pass various Buddha statues as you make your way to the top, where you can get a 360-degree view of Luang Prabang. Hopefully, you’ll have a better, or be it clearer view than me!

A visit to Luang Prabang wouldn’t be complete without a trip to see Kuang Si Falls. So I headed over there with a bunch of friends I’d made on the boat to Laos.

As you follow the marked-out trails, you’ll see falls beginning in shallow pools. The further you walk, they get slightly bigger and more beautiful.

As you reach the end of the path, you’ll end up here – the main waterfall. Now I’ve seen a few waterfalls in Thailand, but this has got to be the most beautiful one I’ve ever seen. If you take a right and go across the bridge, you can hike up the hill path, and you’ll be led to the top of the waterfall. Watch your footing as you Spider-Man your way up as the path becomes unclear and the rocks get a bit slippery.

This town lived up to its crazy party reputation. Again there’s not a heap of things to do there, but during the day, you can kayak, tube, visit the caves and blue lagoon, or grab a beer and find a spot to sunbathe. I pretty much did the latter for most days I was in Vang Vieng. But who wouldn’t with these beautiful views?

The town is infamous for its tubing activities. Unfortunately, I had an open wound on my leg and didn’t want to risk getting that infected – so I gave tubing a miss. However, my friends all went through and said they had a fantastic time! You start at one bar and tube down the river to the next. You’re in the water for a few hours, though, so they said it did get super cold towards the end.

As for the evenings, by 7 pm, free whiskey starts flowing from one of the central party hostels – Chillao. After this, other bars also start their happy hours and drinking promos, offering free whiskey and beers. So if you’re on a budget, it can be a great cheap night out – but like all things, be careful about how much you’re drinking!

Sometimes all you need is F.R.I.E.N.D.S.

And if after that crazy night out last night you need a chilled day, then head to one of Vang Vieng’s cafe restaurants that play back-to-back episodes of Friends all day.

I left for Vientiane with the group of girls I’d met in Vang Vieng. Together, Antonia, Antonia, Sarah, Emma and Demi spent one night in Vientiane and to be honest; I think that was enough. Not because we got sick and tired of each other, there just wasn’t a lot to do there apart from the main sites such as visiting Buddha Park, the UXO bomb museum and night markets.

If you go to Vientiane though it’s worth eating at the Indian restaurant ‘Namaste India’. We went there on the first night and back again the following day before we set off for Pakse. It had great food, affordable and excellent service.

A final meal together before we all went our separate ways. Antonia and Emma headed home, Antonia to Thailand, Sarah to explore Laos on the bike, and Demi headed for the south of Laos.

So off Demi and I headed for Pakse, but I don’t know why. I wouldn’t bother staying here again. Although it’s the capital and most populous city in the southern province of Champasak, there wasn’t a whole lot to do in the city. If you need to go to Pakse for a stopover/change, then fair enough, otherwise it’s pretty much a waste of time. So we did nothing here apart from the hike up a steep hill with a Buddha at the top.

The hike was excellent, and the view from the top was pretty, but again nothing super special.

Now, this was probably my most favourite place in Laos. It was a very bumpy bus ride, followed by a slightly cramped boat ride, there were about 20 of us on this narrow longtail boat with all our backpacks, but when we got to Don Det, we were greeted by the most beautiful landscapes.

Laze around in a hammock

I spent a large part of the beginning and end of my days in Don Det laying in a hammock – either with a book in hand or watching the world go by. If you want to relax and enjoy the tranquillity, this island is the place to be.

Although the leading tourism is from backpackers, Don Det was a surprisingly quiet and peaceful island. There are bars and restaurants along the main street, but they close pretty early, so you can have a chilled night if that’s what you want. Alternatively, a lot of tourists stay on nearby Don Khon, where it’s supposedly slightly quieter.

The easiest and probably most fun way to get around the island is by bike. We rented bikes for the four days we were in Don Det. If you’ve got the maps. With my app, you’ll find it easy to get around on our first day with the bikes we headed to Somphamit Waterfalls.

If you want something more active to do, why not sign up to do a kayaking tour. We paid around £18 for a full day of kayaking with stop-offs at a small waterfall, Khone Falls – the world’s most comprehensive and largest waterfalls and a chance to spot some pink dolphins near Laos – Cambodia border, which we did see.

Even from afar, they were beautiful! Food and water were included in the price too. It was an enjoyable day trip, and I’d recommend anyone do it. Unfortunately, I can’t swim, but the guides always ensured I was ok and had a life jacket.

As I’ve already broken one phone out here due to water damage, I decided not to take my phone/camera – so, unfortunately, no photos for you guys! You can check out what the waterfall looks like here, though.

Planning A Trip To Brazil? These Are The Must-See Places

Planning A Trip To Brazil? These Are The Must-See Places

Why You Should Visit Myanmar Now