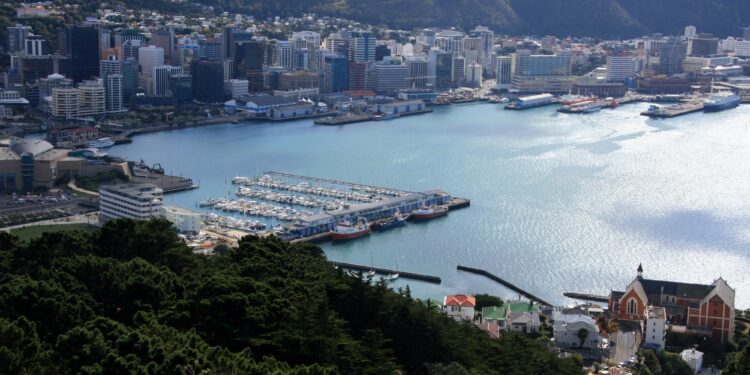 By the time you read my story, I’ll have been in New Zealand for over a week, yet as I write this, I’m only on my second day in this fascinating country. So I decided a while ago that this wouldn’t be one of those vacations where I do as much as possible. Instead, I would relax and travel more slowly. I definitely achieved that in Wellington.

I arrived on my flight from Sydney at around 3:00 in the afternoon on Tuesday (Oct 14), then was picked up by my rental car company to go to their office. Two signatures later, I was off with another little Mazda 2.
The first hour or so of driving in Wellington was petrifying. Driving in a foreign city is a challenge in itself, but add to that the fact that they drive on the left side of the road. It was an adventure, to say the least. Luckily I (and everyone around me) survived unscathed.
And remember that the roads are opposite, and the cars are too. When I first hopped in the car with my driver, I instinctively went to the North American passenger’s side, which is the driver’s side here. Embarrassing. And I keep turning on the windshield wipers when I mean to use my indicator.

Let me back up for a moment to when I first arrived in New Zealand. When we were getting close to Wellington, we flew over the tip of the South Island, and the view was glorious. Bright blue ocean, punctuated by little islands. It looked like the ocean had risen almost to the top of a mountain range, leaving only the tips.

I haven’t had a chance to check out The Hobbit display in the airport yet. Still, while taxiing to our gate (or whatever the correct terminology is there), I caught a glimpse of Wellington Airport.

Anyway, back to Wellington. I made it to my accommodations alive and proceeded to settle in. Once again, I used Airbnb, and once again, I wasn’t disappointed. I’d rented a room in a house in Aro Valley – it’s apparently a small inner-city suburb, whatever that means. I know the house was way up in the hills and had a magnificent view of Wellington. To get to the house, you have to walk down a lovely path surrounded by trees and flowers; it’s pretty hidden.

After settling in, I headed to check out the museum, Te Papa. I’m not a natural museum person, but I figured it would be a good idea to learn a bit more about New Zealand.
The museum was pretty cool, though I was dead tired by this point, so I only stayed about an hour. I learned a bit about the Maori’s history and saw a giant squid. It was gross.
Then I went on a little bush walk! Okay, not really. But the museum has this little outdoor exhibit called Bush City, where you can indeed take a little “bush walk” and learn about, I don’t know, nature stuff.
Besides learning about New Zealand’s plant life, I knew it was chilly. What a darling little bush walk.

Continuing with thoughts about/first impressions of New Zealand in general. First, they have different names for everything. And by “different”, I mean “weird.” For example, I was baffled when I went to the grocery stores. I picked up some orange peppers, but the sign said they were orange capsicums. Other differences: sweet potato is called kumara here, and kiwis are kiwifruit.
Then they just have exciting names and abbreviations. For example, one brand of yoghurt tubes they called “suckies.” Apparently, the banana flavour is particularly nommy.

My second day in Wellington (today, as I’m lying in bed writing this) was mainly spent being lazy. Of course, I could blame it on the fact that I’m coming down with a cold, but honestly, I just didn’t feel like doing much. I did make the trek out to the Mount Victoria lookout, though, and was rewarded with a lovely view.
My next stop is Raetihi, a tiny town in rural New Zealand, where I plan to do some hiking (and more relaxing).