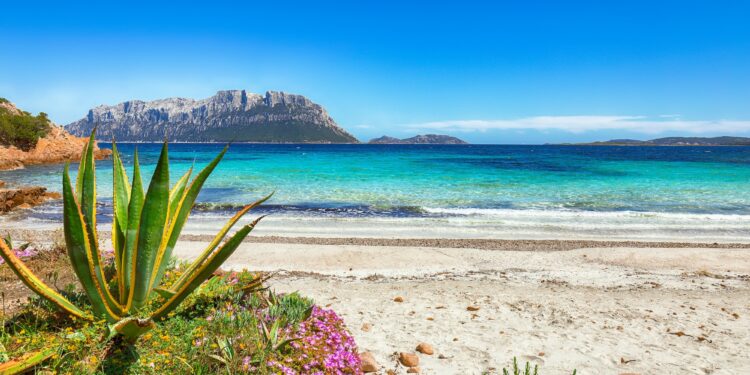 Scottish winters are rough, to say the least. However, every year once it gets to March/April, I always think the same thing, never again. This year, however, I had an inkling that I would be in Scotland for the winter again, so a sun holiday was definitely needed. Sardinia was the final choice.

I haven’t had a ‘sun holiday’ in years. I’ve done the whole backpacker thing all too frequently, couchsurfed my way around New York, France and Eastern Europe and even when camping in Norway in November. The last one, I admit, was definitely a terrible idea. So although it was unusual for me to be the one actually suggesting a “sunshine, beach holiday”, that was precisely what I needed. Backpacking has its charms, and it’s definitely a great way to see lots of places cheaply, but is it relaxing?

So, I wanted to try somewhere new after my other half’s surprise Valentine’s gift (I was hoping for something nice). Although we both wanted a beach – or at least a relaxing – holiday, I was still adamant that it had to be a little different from anywhere else we’d been to. But, of course, I’ve been to most of Europe, so this makes things quite tricky. I’m not sure how; perhaps it was simply by seeing where was cheapest to get to and then narrowing down our list. Still, somehow we ended up looking at Sardinia.

I use Google images a lot when deciding where to visit. Travel for me is a visual search, and 10 blue links on a page don’t tell me whether I want to see it or not. Sardinia looked terrific with its beautiful clear, blue water and sandy, white beaches. Flights into Olbia were reasonably priced.

In Sardinia, visitors flock to two distinct areas: the coastline and the mountains. Fortunately, some beautiful villas in Italy can be found in both areas, whether you’re planning to do some fishing in Olbia, want to explore the capital city of Cagliari, or aim to climb the heights of the Supramonte Mountains between Dorgali and Mamoiada. Although all within the same island, each area has developed a distinct culture, which is perhaps most clearly evident in the food production and cuisine.

Sardinia offers visitors sights, attractions and experiences as varied as its culture and geography. Whether you’re looking for grand high-octane adventure, a few lazy days lounging on the beach, the chance to climb a mountain peak, or diving into the depths of the stunning Mediterranean waters, this island paradise offers something for everyone.

Fast forward four months and we’ve just landed in Olbia. We’re not renting a car (although I admit we would have seen much more if we did). Instead, we’re going to travel by public transport. Olbia’s airport was warm and, unlike most airports, actually somewhere we didn’t mind sitting outside. There was an outdoor bar and pizzeria, and we grabbed a drink while we waited for the bus to turn up.

Our first ‘taste of Italy’ would be in the relaxed Italian approach to life. (Actually, I should say the taste of Sardinia. Sardinians, like the Scottish, see themselves as independent and not as Italian). We boarded our bus at the correct time and waited. Then we waited some more. Then some more. The bus driver had disappeared so we ran late but he soon re-appeared. Eating a Magnum. He then processed to slowly eat and enjoy that Magnum for the next forty minutes whilst chatting to a pal before boarding the bus. He looked blank when a few Italian-speaking passengers complained about the hold-up and then slowly proceeded down the road. It’s not like we were really in a hurry (although we were keen to dump our bags and get settled in), and I think it was a big sign that we were drastically in need of an actual holiday.

Note: I grew up in Portugal. I spent the first few years of my life in Portugal and then in the South-West of Ireland. I don’t think I’ve ever lived the ‘fast-paced’ life, but as soon as you go on holiday, you notice how tense you’ve become, how difficult it is for you to relax and how you worry and stress about things that really aren’t that important.

About an hour later, we got off the bus in San Giovani, a little down the coast. We had been keen to avoid the Costa Smeralda. Instead, we had found some reasonably priced, reasonably non-touristy accommodation at Villa Magnolia Apartments. We hadn’t given a lot of thought as to how we would get from the nearby village of San Giovani to the apartment (apparently, there was a bus stop outside the apartment, but we were never told) and ended up walking along the main road until an Italian guy pulled up on a motorbike.

“You are Scottish, yes?” he began. Then, before we could answer, he said, “I think you are my guests. Villa Magnolia, yes?” He’d obviously begun to wonder where his ‘foreign’ guests had got to and gone out for a look. He returned a few minutes later with his car and dropped us back at the apartment.

We weren’t looking for luxurious accommodation. We were looking for functional, in a good location (i.e. near the beach), and this was ideal. The only thing missing was a little guidebook or notes of what’s in the area. For example, in the first few days of our holidays, it took us well over an hour and a half to get to the beach, walking via the nearest town of Posada. A few days later, we found a ‘shortcut’ that took us through a nature reserve and cut the time down to at least an hour. About a week into the two-week holiday, we found a road that took us to the beach in ten minutes. It’s things like this that would be helpful to put in the notes for when guests arrive. Never mind, at least we got some exercise.

We did our best to speak Italian. I know a little Spanish and have been trying to learn it for a few months. I’m not saying the two languages are the same, but there definitely are similarities. Unfortunately, whether I tried to speak Italian or spoke in broken Spanish, people presumed I was German. I’m not sure whether it was the lack of English/Irish people in the area (there were quite a few Dutch and Germans in their campervans) or whether my hair had gone blonder in the sun. Still, I got an answer in German for every broken sentence I spoke in either broken Spanish or very-broken Italian.

After a few days of charging the batteries on the beach, relaxing and drinking plenty of wine, we decided – or I decided at least – we wanted to do a little exploring. Doing the obvious thing, we decided to visit the local tourist information office to see what they had to suggest. The nearest was in Posada, so we ventured down one morning, hoping to get advice on walking, places to visit, things to do etc.

“Have you been to the castle?” asked the girl behind the desk who, despite clearly being Italian, spoke English in a Liverpudlian accent.

“Yes, inside the old town?” we replied.

“No. We were thinking of travelling by public transport.” I answered.

“Public Transport? Ha! Welcome to Sardinia”, was her reply.

I think I’d expected the local tourist information to support our responsible travel-style holiday and to give us a little background on the buses in Sardinia. Instead, she just looked at us like we were mad and since we had already been to the castle, we decided there wasn’t much else for us to see.

Sardinia’s wealth of natural beauty is sure to inspire anyone who loves the great outdoors. I would love to head out to engage in high-octane activities such as rock climbing the limestone heights of Goloritze or the face of the Via Ferrata del Cabirol, waterskiing on Isola Caprera, windsurfing in Porto Pollo, or going on a fishing expedition off the coast of Villasimius.

I wish we had found transportation because our host suggested that we visit Berchida, with its white sand and red rocks, or Cala Luna, with its stunning flowering trees, which are two of Sardinia’s most remote and inaccessible beaches.

But at that moment, I wanted a no-frills, no-thrills relaxing holiday. So we just took advantage of the idyllic weather and beautiful waters of the Mediterranean to work on our tan. So the rest of our holiday was spent eating, drinking, walking and relaxing by the beach. Although I still crave adventure, that trip to Sardinia was exactly what I needed.

8+ Cruise Tips and Tricks - Make the Most of Your Vacation!