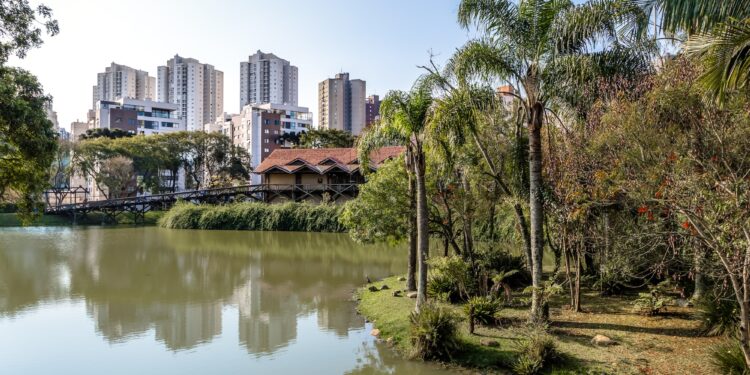 After the past 3 years, I pushed to be the adult I never thought I would have to be in such a short time. Responsibilities, stress, paying bills and more stress, including sleepless nights. But I’m not here to talk about it; I just want to share my debut solo journey and inform you about what places to visit in Curitiba if you ever book a trip there.

Places to visit in Curitiba: Arrival

Let’s say it wasn’t the best option to go on a plane that leaves at 6 am when you are staying 2 hours away from the airport. And it wasn’t my brightest moment when I decided to take the last bus to the airport in Porto Alegre. I took the bus at 11 pm and arrived in Porto Alegre at 1 am. So why wasn’t it brilliant? Because I had to be waiting at an empty airport until the Check-in time, which wasn’t until 5 am.

I could not sleep since I was alone, I brought only my hand luggage with me, but I was still afraid of getting robbed. Or, in the worst-case scenario, I lose the plane because I fell asleep. What did I do instead? I connected myself to the Airport Wi-fi and wasted my time drinking a super expensive Airport coffee with the traditional Brazilian Coxinha. My plane arrived at 7:05 am at the CWB Airport; I called an Uber, desperate to get some sleep at the hotel. And well, the check-in time was at noon, so I couldn’t do what I had planned. Fortunately, the guys at the hotel lobby were very friendly and kept my luggage so I could go around the city. I decided to go to the closest mall since it was colder than I expected to buy a hoodie.

Pro tip: Bring a hoodie and an umbrella whenever you come to Curitiba. The weather is crazy; it could be sunny half the day and the other half freezing and rainy.

And after that, I walked over to the city to get to know it better. Two of the primary places to visit in Curitiba are:

Day one should be the best shopping day since you won’t want to be carrying bags the following days.

Places to visit in Curitiba: Train to Morretes

On the second day, I decided to take a train to the city of Morretes. It is 70km away from Curitiba to Morretes, and you will be able to see the beauty of the Atlantic Forest while on the train.

Brazil has only a few trains left and most of them are only used to transport food and other utilities. Therefore, having the opportunity to get on a train in Brazil is very rare and it is a delightful thing to do. The train will cross the Serra do mar. Built in the 19th century, the way to the “Serra do mar” (The forest of the sea) was a considerable achievement back then. This means it is possible to see the amazing views of the natural biome, the cannons, and the cascades.

The entire trip takes around 4 hours and 15 minutes. On the train, they offer a small meal with cookies and one drink per person. So feel free to bring your food and beverages into your backpack. The train starts moving at 7:00 am and gets to Morretes at 12:30. You can arrange to get this trip at your hotel; just ask for it in the lobby. The van will pass by you in the morning, leave you at the train station, and get you from Morretes to return to your hotel.

Morretes is a tiny city where you can enjoy lunch with their traditional plate “Barredo”. It’s basically meat with farofa (Cassava flour). The entire tour cost me R$285 reais*, which is not much, in my opinion, if you exchange it for dollars.

One of the things I liked the most in Curitiba is how planned it is for tourists. For example, they have an exclusive bus line to go around the most important tourist spots in the city. The Green bus usually passes at the station from 30 to 30 minutes, and for R$45.00 reais*, you get to stop five times. You can feel free to choose which stops you want to go to by yourself.

The bus has the stop message in Portuguese, Spanish, and English. So no worries, you won’t get lost!

*The prices are in reais. By the time I bought the packs, 1 dollar = 3.50 reais. So the Train to Morretes was around 80 dollars and the bus ticket around 13 dollars.

It is a must if you are an architecture and art lover like me! It has more than ten different exposition rooms with artworks from so many artists. And, of course, they have a whole part only for the biography of the famous Brazilian architect Oscar Niemeyer. It has excellent spots for pictures!

As the name says, it is an Opera House, but most importantly, it is one of the things Curitiba is most known for. Its structure is all made of steel and was built in 75 days. It has a lovely spot for pictures!

Curitiba’s botanical garden is a natural park with a vast garden. It originated when more than 18k dried flower displays were donated to the country. This is also a lovely spot for pictures! While over there, I could see a few Brazilian bloggers taking photos for their OOTD.

It is the only Brazilian telecommunication tower open for tourists. As its name says, you can see the entire city from the top of it.