Places To Visit in Chicago | Suggestions From My Last Trip 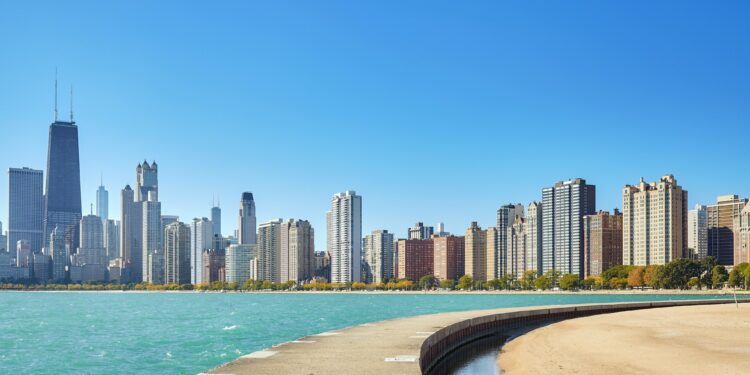 Admittedly, we didn’t have much time in Chicago but exploring another new city this year was great. It seems for every place I check off my list, I just keep adding more to my “Have to go back there” list! I will share a few places to visit in Chicago based on my weekend experience with my family.

We flew into Midway, using the Southwest Companion Pass again, obviously. Midway is about a 10-mile drive southeast of the city itself. With O’Hare over 15 miles driving towards the northeast, you’ll have a ways to go from either airport. Luckily, Chicago’s public transit system connects both airports to the city centre or The Loop (on the Chicago Transit Authority). So we took the Orange Line from Midway all the way in and promptly found some lunch near our stop. With sandwiches from the nearby Cafecito in hand, we walked over to Buckingham Fountain and drew up a game plan for the first day.

We were staying a bit north of the city, much closer to O’Hare, so we had the whole day to walk around and then hit the train in the early evening to get to the hotel. We took full advantage of the day downtown and decided a small walking tour was best. Hence, we strolled along the lakefront up to Maggie Daley Park.

Growing up by the ocean, I have a finite view of ponds and lakes. I mean, ponds are small. Lakes weigh in at a respectable ‘medium.’ Oceans are big. Simple, right? I was floored by the expanse of Lake Michigan. That lake looks like an ocean. Complete with marinas, folks on the beach (even in October), and waves.

Although a few ‘parks’ make up this lakefront scene, I’m going to refer to the whole area as Maggie Daley Park. This is the one known for that giant silver bean, officially – the Cloud Gate. We had to check that out! For a substantial shiny object, it sure attracts a lot of visitors. The place was swarming with tourists, but it was really cool. Definitely one of my “check off the list” moments.

The next day, while I was at my conference (see below), the other two explored the city independently. I learned plenty of new things at the Chicago Seminars, but it seems I didn’t have nearly as much fun as they did exploring the city!

On the lakefront, just north of the bean, Navy Pier houses plenty of shops and things to do. The pier has taken many rolls throughout its life, but it’s always been a great place to explore some of the Chicago feel. The pier is also included on the National Register of Historic Places.

My family explored Navy Pier while I was shopping, so I didn’t get to check it out myself, but they had great reviews of The Centennial Wheel and the Skate by the Lake rink on the pier. The Centennial Wheel is a bit pricey ($15 adults, $12 kids), but the views are killer.

Chicago has some fantastic museums in the city. While we didn’t get a chance to go to all of the institutions I would have liked to, we were able to hit the Adler Planetarium and Field Museum during the weekend. We picked these two in particular because they seemed interesting, and we were able to take advantage of our local museum’s reciprocity program! We’ve been members at the Museum of Science in Boston for a few years since the price is worth it after only 2 or 3 trips there. Since the MoS is a member of the Association of Science and Technology Centers (ASTC) and the Association of Zoos and Aquariums (AZA), so they have a fantastic reciprocity program. The Adler and the Field are both members of the ASTC, so our membership got us into both museums absolutely free!

They visited the Adler after wandering Navy Pier, so I didn’t get to see this one myself either. According to the report, though, the Sky Theatre is incredible, and the whole building is filled with great information. There are massive pictures and diagrams of objects found in space and plenty of activities for kids (and hands-on parents) to try out. I was very jealous of the ‘hovercraft’ the kiddo got to build.

Places to visit in Chicago: The Field Museum

The Field Museum was impressive. Plan to spend at least 2-3 hours there if you can. Double that time if you’re a museum person. We didn’t have to pay admission, courtesy of the ASTC reciprocity program. Still, we did check our two larger backpacks for the day (only $3 apiece). Checking our bags allowed us to explore the museum leisurely and leave for lunch later without lugging our stuff around the city.

One of the main attractions here is Sue, the T-Rex skeleton. Sue is the world’s largest, most complete, and best preserved Tyrannosaurus fossil, and she was found right here in the states! Coincidentally, only a few hours from where my family lives in South Dakota. The fossil is magnificent, although she seems slightly more petite in person than in Jurassic Park.

My favourite museum section was the Native American exhibits, specifically the Pacific Northwest art. Looming overhead in one of the darkest rooms in The Field Museum, the carvings on the totem poles seem to come to life. As I walked through, fascinated by the details engraved on the wood, my son gripped my hand tighter, worried we might have some kind of a “Night at the Museum” experience.

We explored the Field for a solid 2 hours, then caught an Uber into the city for a bit of lunch. Leaving our bags at the museum, we went back after lunch for about another hour, meeting up with a friend from Chicago!

Ok, ok. I get it. The deep dish is tourist pizza. But you still have to try it, right?! I actually really like deep dish, tourists be damned! We had actually planned on heading to Giordano’s location nearby. Chatting up our Uber driver, she quickly rerouted us to a place called Pizano’s, a little further away. I feel everyone has their own pizza place they favour, and she was confident we’d have a great lunch there. We did! I’m a huge pizza fan, and I genuinely enjoyed the deep dish there and an Italian sausage roll we ordered.

Sum up the budget

I did not realize how much a single weekend in Chicago could cost. And we didn’t even stay downtown or do anything high-class. So here’s the breakdown:

I’ve only taken 4 trips since travel hacking. Disney World, Mexico, DC, and this weekend in Chicago that you happen to be reading about right now. Disney was tricky – I didn’t really plan the trip myself, it was a bit short notice, and it was my first time hacking. Including the savings from my Chase Disney card and the Barclay miles I used towards the flights, I only saved around 14%. However, I’ve saved at least 44% of the total upfront cost in each of the other three adventures by redeeming points or booking miles! That’s the reason I’ve fallen for this hobby. I’m able to travel for cheap. I don’t feel bad doing it, and I’m not stressing about my bank account balance while exploring.

Chicago was my last trip for a while. We’ll be hanging out with our local family for the holidays and don’t have any travel planned until further out.

I hope to write more on some of the deals I’ve been using over the holiday season. There are tons of opportunities to stack savings and points as we gear up for the holiday shopping season, so I’m looking forward to it! Feel free to share any ideas on places to visit in Chicago for my next trip there!

Travelling With Kids in India: 10+ Tips and Tricks