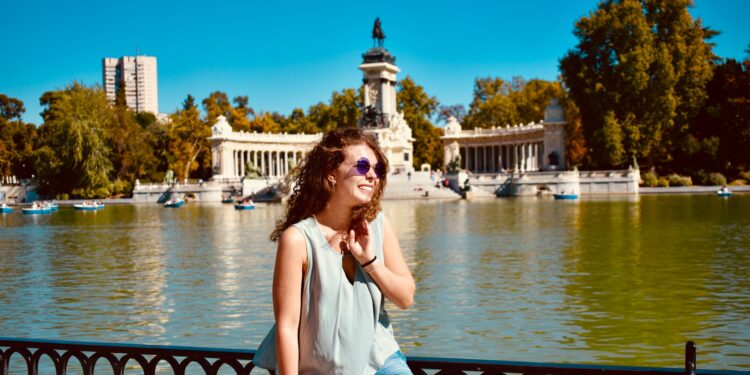 Slowly but surely, we are making our way through our vacations in Spain. So far, I’ve written about Andalucia and what you can expect when visiting Spain, especially for the first time.  Now here we are, on day 5 of our 15-day vacations, ready to explore the capital city of Spain. So without further ado, here are our adventures in Madrid!

Of course, we took the train! We left the Sevilla-Santa Justa train station around 9:00 in the morning and arrived at Madrid Atocha around 11:00. After arriving in Madrid, we had to walk about twenty minutes up a hill to find our hotel. This was the first time on our trip that we actually got lost! I mean, we weren’t really “lost” per se… we knew where we were; we just had no idea where the hotel was! Fortunately, it only took us three laps around the block to realise that we kept passing the hotel; we were just on the wrong side of the street.

Once we (finally) found our hotel, the Eurostars Hotel Plaza Mayor, we were pleasantly surprised to learn that a room was already waiting for us. Score! The hotel was definitely lovely, but probably what I’d consider average by my standards. It was perfectly clean, and the staff was wonderful, but nothing too fancy. Just a nice place to rest for the night.

Once we got to Madrid and dropped our bags off in our room, we hit the streets right away, searching for some food! First stop, Plaza Mayor! Plaza Mayor is huge, and we had our choice of restaurants. At this point, we really weren’t picky, and we had big dinner plans, so we just picked the first restaurant that looked good.

As we sat at lunch, we were able to watch all of the people in Plaza Mayor. It was, umm, interesting, to say the least. Actually, I really didn’t appreciate this at all: there were so many people trying to sell things! And I don’t mean people with carts and kiosks. There were people with hundreds of sunglasses laid out on blankets lining the entry to the plaza. Men were walking around trying to sell selfie sticks. There were people dressed in costumes offering to take a picture with you (for an undisclosed fee, of course). I mean, I get it; people are trying to get money out of tourists. Fine. But they were pushy and rude and all over the place. If I hadn’t been sitting down eating a meal, I would have been out of there in seconds. Yes, I know this happens in many tourist places. We did experience it many times (both in America and Europe), but this was the first time we experienced it to this extreme extent. It really ruined the Plaza Mayor and our initial impression of Madrid. So, bottom line, if you’re in the market for a selfie-stick, then head to Plaza Mayor on your next trip to Madrid. Otherwise, I would personally plan to walk through it and move on.

Good news, though, the day got better from there! After lunch, we made our way to the Royal Palace! It was beautiful! We didn’t go inside, we just walked around it and through the gardens, but it was still one of my favourite parts of Madrid. The palace was originally built in the mid-1700s and became home to Carols III in 1764. The palace is no longer the official home of the royal family. However, it is still used for ceremonies and state functions.

We then made our way slightly north to something really cool – the Templo de Debod, an ancient Egyptian temple built in the 2nd century BC. In the 1960s, floods threatened the historical architecture of the region where the temple was located. So many countries, including Spain, came to Egypt’s aid in saving the monuments. In 1968, as a thank you for their help, Egypt donated the Templo de Debod to Spain.

Continuing onward through Madrid, we walked across the city to the Retiro Park and the Alfonso XII Monument. I know what you’re thinking: “who is Alfonso XII”. Well, I will tell you! Alfonso XII was King of Spain from 1874-1885. Though he was king for only a short time, he was well-loved by his people.

There is a small lake that sits at the front of the Alfonso XII Monument. Why? So that we can rent rowboats and spend the afternoon in the beautiful Spanish sun! Well… maybe that isn’t the official reason for the lake, but it’s still a terrific perk 😉 For only €6 for one hour on the lake, we did just that! Amazingly, the air was much cooler on the lake. We were able to get up-close and personal with the Alfonso XII Monument. It was definitely an afternoon well spent!

After our afternoon activities, we decided to go back to the hotel to rest and shower before dinner. We made reservations at this restaurant months before and had no idea what a treat we were in for.

We ate at the world’s oldest restaurant!!! And by that, I mean the oldest continuously running restaurant. Restaurant Botin was founded in 1725 and is best known for its delicious suckling pig. Since we were there, we had to try the pig, and it was one of the best things I have ever eaten! It was a little pricey, but oh so worth it. The entire experience was incredible and so cool to be part of.

This applies to every trip ever: drink lots of water!! Even if you have to spend money on water, do it! We walked so much, and it was so hot, that we drank at least five water bottles each while in Madrid.

7 Things to Do in the Netherlands