Mykonos: A Popular Travel Destination In The Mediterranean 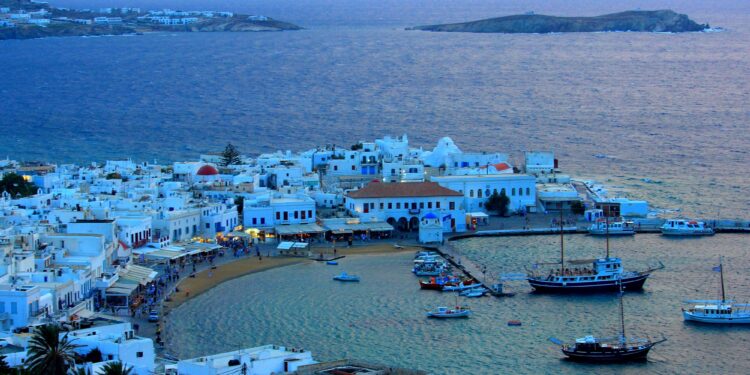 Mykonos has developed in the ’70s into one of the most popular travel destinations in the Mediterranean. It is visited by over a million tourists every year, many of whom are international VIP’s. However, a great, cosmopolitan place, with great opportunities for nightlife throughout the City’s and the Port’s picturesque alleyways, is probably still under the protection of the wine god Dionysus!

While this colourful river of people floods into the island every year, Mykonos is always charming, extra white, blue and flooded with light; it is still the traditional island of the Cyclades, where one can enjoy the local spicy cheese, tasty kopanisti, and listen to the older people of Mykonos speak their particular idiom, wearing their black seaman’s cap stubbornly.

Mykonos is one of the numerous beautiful islands of Greece and a top-notch global destination famous for its cosmopolitan character and intense nightlife. It is part of the Cyclades island complex, located between Tinos, Siros, Paros and Naxos. The island stretches over 105183 square kilometres, and its highest peak is at an altitude of 341 meters. In the not so distant past, Mykonos was a beautiful but poor island in the Cyclades, blessed by nature with its impressive granite rocks and unique sand strips and beaches. Locals were trying to survive working with or against the elements of nature.

Nevertheless, they managed to make a decent living for many centuries. All this gave the island a unique character that attracted the first affluent western visitors a few decades ago, who soon turned Mykonos island into one of the most popular tourist destinations in the world. Only the granites and the sand have survived, still noticeable under the countless sun umbrellas and lounge chairs from the island’s past. Today, the heart of European lifestyle beats in this island; people gather here to see, enjoy themselves and bask in the loud and vivid cosmopolitan way of life. If this is what your dream vacation sounds like, Mykonos is undoubtedly the place for you. Despite this facet of Mykonos, visitors can still come here and enjoy the inner peace offered by contact with nature. There are numerous beaches and landscapes still untouched by its cosmopolitan character and ideal for passing the time whilst relaxing. You could also visit the various archaeological sites and monuments scattered around the island. It has also proved a marvellous island for family vacations for those who can utilise its alternative lifestyle.

Mykonos covers an area of approximately 85  km2, and it is situated almost in the middle, between Tinos and Naxos and east of Syros, where Ermoupolis, the capital of Cyclades, is located. Mykonos’ population is at about 9,500 people, but the number of tourists visiting the island is multiple during the summer period. The soil is generally rocky and arid, and this fact has turned the people’s interest in fishing, navigation and emigration. The presence and activation of the French Archaeological Institute, which conducted excavations for decades and has brought to light the priceless treasures of Delos, has helped a lot. The Mykonians quickly adapted to the new conditions, which quickly gave the “mykonian tourist model”. Led by intuition and hard work, the island improves the services offered and claims a distinguished position in the international tourist industry, having as competition places of much larger sizes. Mykonos alone attracts one-tenth of the number of tourists visiting Greece every year.

The island complex, including Mykonos, Delos and Rinia, is east of Syros, southeast of Tinos and north of Par Naxos. The terrain of these islands is mainly granite. Thus it is arid and infertile. Altitudes are low, and the tallest peaks approach 373m on Mykonos (Profitis Ilias Varniotis), 136m on Rinia (Aghrelou, Houlakas) 112m on Delos with Kynthos, from where Zeus watched the birth of Apollo. Mykonos coastline is 89 km long, with quite a few bays forming beautiful beaches, thanks to which –among others- the island obtained its fame. The sandy beaches of Mykonos owe their existence to the erosion of granitic rocks and the large concentration of granitic sand at river estuaries, with the help of rain and strong winds. The complex of Delos – Rinia is similar.

Because of the terrain morphology, the water supply on the island is limited. For this reason, two dams have been built on Mykonos to collect surface water: the dam of Marathia, NE of Hora, which forms the artificial lake of Marathi and the dam of Ano Mera in the NE part of the island. The island’s climate is particularly dry; in combination with the rocky terrain and water shortage, this favours maquis and phrygana vegetation, which does not lack interest. Among plants on the island, 26 are either endemic or rare and threatened species. Fragnantissimum, which you will see growing on the island, is native to Mykonos. The island’s fauna, albeit poor because of the limited vegetation, is very varied. Mammals include hedgehogs, hares, wild rabbits, ferrets and mice, and reptiles are represented by 11 different protected species.

Furthermore, Mykonos is on the migratory passage of birds. However, they seem to prefer the peace and quiet of Rinia, Delos and the neighbouring rocky islands. Rinia and Delos are archaeological sites under the auspices of the Ministry of Culture. Thus any activity is prohibited except by a special permit by the Minister. Furthermore, Rinia and the rocky islets Traghonisi and Htapodhia are included in a program to conserve the islands’ flora and fauna as Special Protection Areas.

Mykonos has a temperate but relatively dry climate, similar to that of the other south Aegean Sea islands. Winters are mild, and strong north winds dominate the island in July and August; their strength is usually around 6 to 7 on the Beaufort scale. Sometimes, they get up to 8 or 9 Beaufort. When the weather is not windy though, the summer heat makes its presence known, since the average temperature in the summer reaches 25° C. Winters in Mykonos are mild, compared to other Greek regions, with rare rainfall due to the limited vegetation and microclimate formation, while snowfall is rare to improbable. The average temperature in Mykonos during the winter months is 12° C. The average annual sunshine is approximately 2700 hours, while the sea temperature from May to October is between 18° C and 22° C. It is best to visit the Greek islands during summertime.