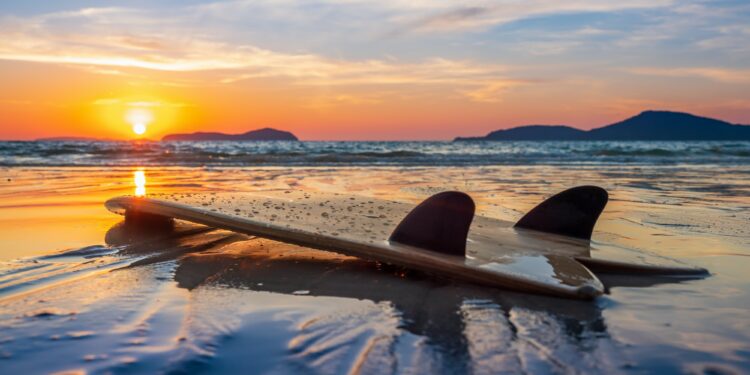 We can definitely say that Sri Lanka’s surf lived up to the hype during two weeks on the coast. We scored a couple of swells with slightly overhead waves. The early morning and late afternoon sessions were almost always glassed off.

We based ourselves in Midigama, a small coastal village with a train station, a couple of surf shops, and a variety of restaurants and guesthouses….that’s it.

The best thing about surfing in Midigama is the location. With five surf spots within walking distance, we couldn’t have picked a more perfect home base.

Midigama is a Sri Lankan version of Hotel California, a vortex that sucks you in and doesn’t let go. The daily routine of eating, sleeping, surfing, rinse, and repeating doesn’t get old if the waves are pumping. The twelve days we were ‘stuck’ here could easily have morphed into a hundred and twelve.

What About The Surf

Sri Lanka is far from being an undiscovered surfing destination. The southwest coast receives the best waves between December through April. This is the so-called dry season, and with less rain, the water quality is cleaner. However, by May, the southwest monsoon begins, and stormy, rainy conditions prevail.

We settled in a quiet guesthouse just behind the train station, a 2-minute walk from the beach and the surf spots Lazy Lefts and Lazy rights. Lazy Rights is a beginner’s wave and, as the name suggests, breaks right. The wave is perfect for longboarding and Stand Up Paddlers (SUP).

Lazy Lefts is a reef break with more power than its neighbour Lazy Rights. The wave can bowl up on the inside reef creating a fast section producing the occasional barrel. Then, with a juicy swell, the wave gets more and more exciting.

Lazy Lefts is visible from the road and gets crowded early. The paddle out is through a deep-water channel making this spot accessible to beginners. The fruit stand on the beach is the spot for the post-surf coconut!

A few hundred meters east lies the best wave in Midigama, Ram’s Right. Rams is a shallow reef break with a steep drop and bowling. Barrels are typical, as are the chances you will bounce off the reef. But, again, this is a spot for those who know what they’re doing. The paddle out is through the shallow boneyard reef.

The next beach to the east is Plantation Point, a combination reef/beach break with lefts and rights. Finally, coconut Point is further down the same beach, a reef break with a screaming left over the inside shallows when the conditions are perfect.

We were delighted with the set-up we had in Midigama. Walking to the beach for daily sunrise and sunset sessions was just what we had in mind. If we had rented motorbikes, we could easily have driven to nearby towns to check the surf. Motorbike rentals went for 800-1000 rupees ($5-6.50 USD) per day.

East of Midigama is the fishing town of Weligama, and you can smell it when you get there. Welligama’s main beach has gentle waves suitable for beginners. However, we found the main attraction at this beach to be the cheap seafood restaurants that cook to order.

There are two surf spots at the western end of this Weligama Bay: Jungle Beach, a left-hander, breaking in front of the Cape Weligama Hotel and Fisherman’s Reef, a reeling right-hander in front of the boat harbour. Both breaks are for intermediate to advanced surfers and have long paddles.

Just past Weligama is Mirissa, a touristy beach resort area with a gentle wave perfect for beginning surfers. Beyond Mirissa, there are waves to be found around Matara, Dikwella and Tangalle. On a motorbike, these are long distances to drive for a surf.

Sri Lanka’s surf scene is unlike anywhere we’ve travelled for waves. It’s mega chill and not spoiled by commercialism and crowds. As a result, surfers worldwide are flocking here to catch waves. The island is especially popular with the beginner crowd attracted to the nomadic surf lifestyle.

We observed some poor surfing etiquette with heaps of beginners and a lack of any heavy local presence. However, coming from Hawaii, we would like to share some tips that go a long way for anyone getting into the surfing lifestyle.

Don’t mess with the locals…anywhere. In Sri Lanka, most locals who surf work in the local surf industry and will be respectful in the water because they don’t want to gain a bad reputation. Then there is the young, lippy Sri Lankan surfer with the no-fear attitude, dropping in on everyone. That’s life. Get over it. Surfing still suffers from patriarchal ‘localism’ and probably always will. The best thing to do is to be friendly and always smile. You can learn a lot from watching the locals. Pay attention to where they line up; they always seem to know when the set waves are coming.

Don’t drop in. Surfing is more about catching the wave. The rule is that the person who takes off the deepest has the priority (usually). Admittedly, this favours the advanced boardriders (who have paid their dues).

The worst lapses in surfing etiquette we saw dealt with these two rules. Don’t get cheeky with the locals, and don’t drop in. And one last thing, the inconsiderate longboarders wavehogging ankle slappers calling people off as if they were at Pipeline, don’t be that person. Don’t make waves; give waves. Let the beginners have a couple. Let the locals have their fun.

There’s plenty of waves in Sri Lanka. If you really want a solo session, get up early, like 4 am; you’ll have the waves to yourself till 5:30 am for sure. And most of all, have fun because:

“The best surfer out there is the one having the most fun.”

Where to Camp in Chile?

10 Things To Do In Pondicherry

10 Things To Do In Pondicherry