Luxembourg City: The Symbiosis of Old and Modern 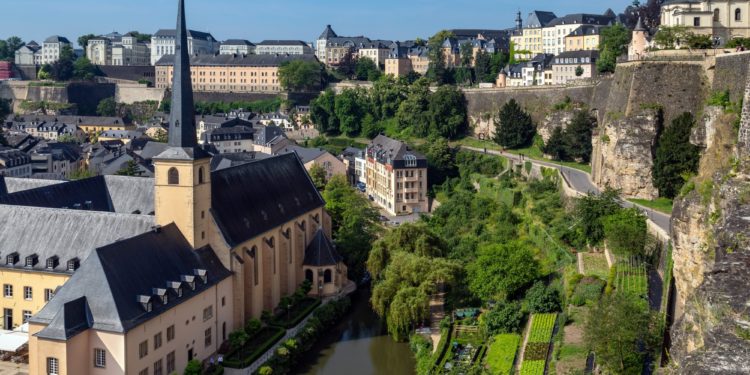 In between Belgium, France and Germany, there is one of the smallest, but, at the same time, one of the most significant countries in Europe – Luxembourg. Luxembourg City could define the word ‘modern’ by being home to some of the European Union institutions, major banks, and other significant business corporations. Nevertheless, happily, modern things haven’t taken away part of countries traditional – old and retro – look. So, if you would ask me to describe Luxembourg in one sentence, that would sound like a country that prospered due to the symbiosis of old and modern.

It’s been almost a week after our day trip here, but I still can’t summarise all the impressions that this city left me. It is old and modern, green and glassy, small and full of sights at the same time… Multi-faced. Yes, multi-faced! That’s what Luxembourg City is.

Let me prove to you that; let’s start with facts.

In the 10th century, on the high Bock rock at the confluence of Alzette and Pétrusse rivers, Lucilinburhuc castle (‘small castle’) was built. Thus, the cradle of today’s Luxembourg transformed into a superior fortress, sometimes even called Gibraltar of the North over the years. Sadly, the colossal fortress that seemed unbreakable over the hundreds of years was destroyed almost to the ground in the mid-19th century. Despite this, we have something saved until today. Some parts of fortress walls and more than 17 kilometres of tunnels are still available for our eyes!

Luxembourg City is the biggest in the country with just a little bit more than 100 thousand residents. It is divided into 24 different size quarters. In my opinion, each of them has a totally different face and character to show to their guests.

Due to its strategic location, throughout history, the city had a great significance for a neighbouring country, mainly France and Germany. This constant connection between the countries affected local culture significantly. As a result, today, Luxembourg speaks in three national languages and lives the life of three mixed cultures: Luxembourgish, French and German.

What is more, the city is Europe’s banking and administrative centre. Together with Brussels and Strasbourg, Luxembourg is the seat of European Union institutions, such as the European Court of Justice, European Investment Bank, Secretariat of European Parliament and others. In addition to this, Luxembourg is very attractive to financial service companies and startups, which, together with EU institutions, shaped the city’s skyline with beautiful skyscrapers and other modern architectural masterpieces.

Our experience in Luxembourg City

Personally, after some time in the city, I started to picture it by its quarters. Every one of them that we had a chance to walk through left a different kind of impression. One was modern with glassy masterpieces rising to the sky; another was old and defended by a Medieval castle wall. So for me, the picture of Luxembourg City is as diverse as are its quarters. And noteworthy, diverse is always more interesting!

As usual, some parts left me a deeper impression than the others. So those are three quarters: modern and glassy Kirchberg, old and authentic Grund, and historical Ville Haute quarter.

I think that this quarter is destined to be modern forever! From the locals, we got the impression that construction works rarely stop here. Each building that starts to look a bit older than the others is replaced by a new one. But why so? Because Kirchberg is home to EU institutions, plus for a significant part of banking and administrative corporations. EU member-state flags and flags of the international companies don’t stop flittering in Kirchberg!

We are a bit of old-town lovers; we weren’t too excited about Kirchberg before going there. However, it proved one of the most interesting parts of the city. Of course, we got lost around those interesting glassy buildings! But most of all we got lost in the supermarket in the middle of Kirchberg – prices and variety of things in Luxembourg is many times better than in neighbouring Benelux countries.

It is the part of an old town located on the banks of river Alzette below the city centre. Grund borders with the Bock rock and the walls of the fortress. Due to the river floating through and the cliff in front, Grund is one of the most picturesque quarters in the city. Actually, it probably is the quarter that is photographed the most in the city. Well, I am just guessing by Google search results for ‘Luxembourg ‘.

It is probably strongly related to the fact that Grund holds several of the most famous sights in the city. One of them is the beautiful ancient Abbey of Neumünster. What is more, there is a charming scenic overlook above it, with all the Grund in the background. Therefore, it seemed one of the nicest places in the city. Also, we haven’t tried it for ourselves, but we have heard that Grund is the best place to experience nightlife in Luxembourg.

Ville Haute, located on the Bock cliff, is full of historical sights. It is definitely the quarter with the most considerable number of significant, beautiful and exciting city sights to discover. Moreover, it holds a list of celebrities like Grand Ducal Palace, Notre-Dame Cathedral, and the beautiful Gëlle Fra Monument. Personally, we spent most of our time in Luxembourg City wandering in the streets of the Ville Haute quarter.

Although the Christmas market wasn’t working yet, those holiday decorations, cute wooden houses, and ice arena had created a pleasant atmosphere for upcoming holidays.

In conclusion: Luxembourg City is a must-visit

Luxembourg is extraordinarily diverse, and this is what makes it unique! Personally, I enjoyed how differently the city could be seen from different quarters. Moreover, each of those quarters is beautifully preserved and cherished – you won’t find untidiness here.

To sum up, Luxembourg City is a capital that every wanderer should definitely cross once in their lifetime. There are many beauty and points of interest concentrated in such a small city!

What To Do In Riyadh For Fun

What To Do In Marseille For The Weekend

What To Do In Marseille For The Weekend

Wondering What To Do In Helsinki? 5 Suggestions!