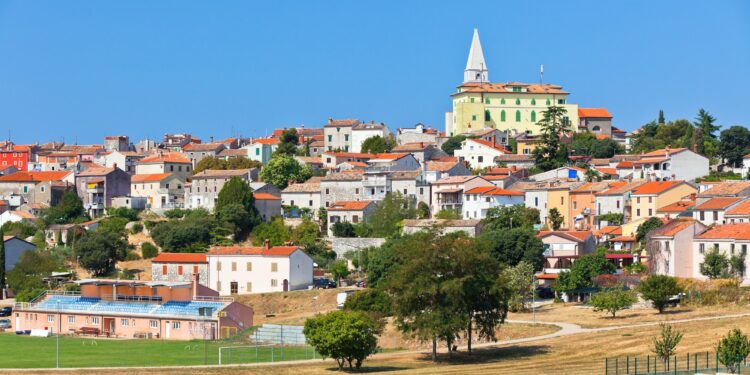 Christian and I took a road trip from Vienna to the Istria region of Croatia. We were blown away by the beauty of this coastal area. The drive from Vienna took around 6 hours. Our route involved driving south towards Graz, then through Slovenia to the coast and then south to Rovinj, where we booked an apartment for a few days.

Rovinj is a charming little city on the northwest coast of Istria. The history of the town is fascinating (once governed by the Republic of Venice and then later the Austrian empire) and its diverse influence on various cultures can be seen from the cuisine to the architecture.

We arrived at Rovinj in the evening, where the lady renting out her apartment greeted us. The apartment was just what we had in mind- very authentic and original. However, we suggest that if you plan a trip to Rovinj, make sure you book in advance (and avoid going during high tourist season) as we had trouble finding accommodation for this period. Luckily for us, Christian had a Croatian friend who was able to reach out to one of their contacts last minute.

Arriving late in the evening, we walked around the area, got a late dinner of Ćevapi (a traditional Balkan dish) and then settled in for the night.

The next day we started by visiting a popular bakery in the town square. We could tell it was the place to go by the long line outside the shop. Once we looked at the baked goods, we knew why it was so popular-everything looked and smelled delicious! A widespread baked good of this region is the delicious Börek. Börek is a baked pastry ( same idea as phyllo) filled with sweet and savoury fillings. We tried the spinach-filled and cherry-filled ones… so yummy!

Rovinj is a small enough city that you can walk around most of the old town daily. There are plenty of markets, shops and restaurants to explore; you will be surprised at how quickly the day passes. After a bit of shopping and a lunch of grilled squid, we took a taxi boat to Katarina Island. This island is super tiny and can easily walk around it in less than an hour. There is not much on the island except a hotel called Hotel Katarina. Still, from what we saw, it looked like the perfect spot for a family vacation. We explored the island for a bit and then jumped into the sea. The water was nice and warm and the colour was a lovely turquoise blue. After basking in the warm water, we caught the boat taxi back to the mainland. Finally, we enjoyed dinner in the harbour while watching the sunset.

The next day we decided to explore the surrounding cities and towns by car. So if you visit the Istria region, we highly suggest renting a car. We discovered that there was so much to see, and we were happy to have had a car to see it all.

We drove south, down to the city of Pula, the largest city in the Istria region and located at the southernmost tip of the area. Although the town is very industrial (the presence of ships and cranes take up most of the harbour), it was still excellent with the ancient amphitheatre looking out onto the sea. This roman ruin is the best preserved ancient monument in Croatia and is also depicted on the Croatian 10 kuna banknote.

After an afternoon of exploring, we returned to Rovinj. As we were driving back, we saw a sign for the town of Bale. We had previously heard of the town without knowing much about so we decided to stop and check it out.

We were pleasantly surprised by this little town. With its stone-paved roads, intricate alleyways and medieval architecture, we felt like we had discovered a hidden gem. Although there was a time when this town was occupied by the likes of the ancient Romans and the legendary lover- Cassanova, the town saw a period of abandonment when the townspeople fled to Italy after the second world war. Despite its recent history, the town has seen a rejuvenation with the opening of hotels and restaurants, including the quirky jazz bar Kamene Priče.

After our day of exploring Pula and Bale, we made our way back to Rovinj, where we spent our last evening drinking wine and cocktails in the harbour.

When it came time to leave Croatia, we were sad to go. We spent three nights in Rovinj, which flew by. It would have been nice to have had at least a week to properly explore the region, but we knew we would be back someday.

On the drive home, we stopped in the town of Poreč- a coastal town in the Istria Country. We found a parking spot in the main harbour area and walked along the water, where street vendors sold antiques of all kinds. There was a beautiful view from the harbour and a glimpse at the old town. Finally, we left Poreč and started the 6-hour journey back home.

Although our time was short, we had the perfect holiday. We had heard much about southern Croatia but not much about the north, so we were overjoyed when we discovered how beautiful it was. Do not overlook the north for those interested in making a trip to Croatia. There is so much to offer, and the beauty and history of the Istrian region will leave you wanting more.

9 Museums in Stockholm For Every Visitor