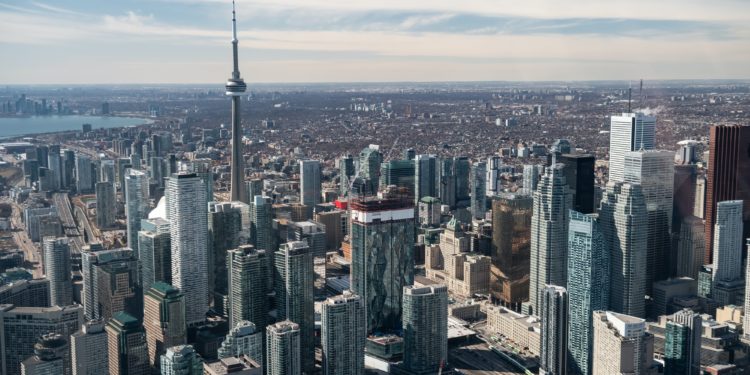 When we were in Toronto, my friends and I wanted to explore their different and diverse neighbourhoods. So between being shameless tourists at CN Tower and Casa Loma, we biked, walked and took the train around the city. It was probably my favourite part of our time there, getting around and feeling for each area. I wish we could have gotten to more of the neighbourhoods in Toronto, but I think we could see a good amount given the time that we had.

We came to the Bloordale Village neighbourhood solely to check out a bookstore called Monkey’s Paw, which I heard was astonishing. The store specialized in rare and unusual books and had everything from old medical texts to maps to beautiful editions of classic novels.

In addition, they have a book vending machine that spits old books for a $2 (CAD) coin. It’s impressive, and my friends and I each got one. We intended to move on to the next neighbourhood, but the store next to Monkey’s Paw, Zebuu, drew us in with its colourful prints and cozy home goods.

From there, we were hooked by each store we passed in Toronto.

First, we stopped into a record store called Dead Dog Records. They had an excellent selection of well-kept albums from all imaginable genres. Next door to this records shop was a heavenly thrift shop called Ransack the Universe. This store had mountains of old books, cameras, records and jewellery that were perfect for rummaging.

Once we had our fill of the shops, we stopped into Duffy’s Tavern for a beer and some lunch. The restaurant had an oak bar that ran the wall length with plenty of bars on tap and football and soccer games on the TVs behind it. We split an order of poutine (yum!) and BLTs.

The Distillery District is a pedestrian-only neighbourhood with cobblestone streets and beautiful old brick buildings. My friends and I walked in and out of the stores and galleries, all of which were a little pricey, but they had some adorable stuff! I liked a few, including a clothing boutique called Gotstyle and a gift store called Black Bird Vintage Finds.

Also, quite a few wedding photoshoots were happening while we were in the neighbourhood, especially by an iron sign that said LOVE with love locks all over it. It was so dang cute.

After making the rounds, we decided to move back to Spirit of York for a flight of house-distilled vodka, gin and aquafit. The distillery was very chic, all copper, chrome and glass inside. We chose two leather chairs to sink into and taste test our spirits. They were very flavorful and light, but I still had to chug water after each one. I’m not yet sophisticated enough to drink straight gin.

My friends and I biked to Kensington Market from Bloordale Village, along main streets and through a gorgeous neighbourhood with tree-lined streets. Initially, I was opposed to this idea, but they convinced me that it would be fun to try out Toronto’s bike share (much like Chicago’s Divvy Bikes).

I ended up loving it, which made me wonder why I’d never done it before. Regardless, we were able to return our bikes near Kensington Market, where the smell of nagchampa instantly hit us. We turned onto one of the main streets of the neighbourhoods and entered a colourful world of thrift stores, head shops and cafes.

It was reminiscent of Haight Ashbury in San Francisco. We stopped into a cafe called Fika for some caffeine, and I tried their Canadian Spiced Latte, which was flavoured with cardamom and mint. It was delicious, and the cafe was gorgeous. We took our coffees to go and strolled through the crowded streets. I have to say, this neighbourhood’s street art was on point. Each alley wall was covered with colourful depictions of people and places.

Some true gems were among the secondhand stores and jewellery stalls (which were fun to browse through but blended after a while). The Organic Press, a juicery that also sold beautiful potted plants and ceramics, and Paradise Bound, a record store that also sold Japanese art. These, among others, are a solid reason to visit this neighbourhood and immerse yourself in its crazy, colourful vibes.

Leslieville was my favourite neighbourhood of the trip for a good reason. Their cute boutiques, coffee shops and restaurants were a dream to pop in and out of. We started having breakfast at Lady Marmalade’s acute, brightly lit cafe that served breakfast and lunch. I had the bread pudding of the day, apple cinnamon (dessert for breakfast, hooray!). The food was excellent, and the coffee was served in mismatched cups and saucers.

We sat at a table by the window, and the sun was nice and warm, creating a cozy, golden atmosphere that was hard to leave. The rest of our time spent in Leslieville had a similar effect. We walked up to one side of Queen Street and down the other on orange leaf-covered sidewalks.

Good Neighbor was the first shop we went into, and it set the bar pretty high for all the others. It marketed itself as a general store, selling a little bit of everything (including but not limited to clothing, home goods, paper goods and jewellery). I loved their Up North brand, which had the warmest looking knit hats.

We went to Queen books next, which was a beautifully curated and whimsically decorated wonderland. Each display was thoughtful, and the staff picks (something I judge bookstores on) were spectacular. I wish I could say we bought something, but we had too many books in our luggage already.

Next, there are two Arts Market storefronts in Leslieville, and we went into them both. They are collectives of local art and antiques, and they are both fantastic. I particularly loved the feminist enamel pins and the plastic dinosaur planters.

We went into a few more stores before our parking meter was up, but the standout of the day was Brika. I loved everything they had in their beautiful shop, especially their prints and paper goods (am I the only one who will buy ten planners in a year because they’re each so great?). I left with a cute pair of earrings and the info for their online store, which does indeed ship to the States.