Belfast: An Exciting Weekend With Friends 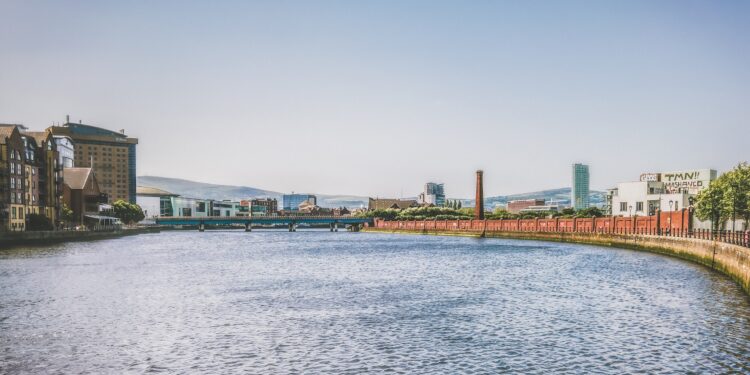 When one of my best friends moved to Belfast in August, I was gutted that she’d no longer be a tube journey away on the other side of London. But the silver lining came this reading week when, six whole weeks apart, I finally had some time off from uni and could afford a weekend away to visit her.

I left Egham bright and early in 20-degree weather and October sunshine. After whipping out my passport at the gate and relaying most of my flight my confusion about why I didn’t actually need it to fellow passengers, I crossed the Irish Sea for the first time.

Admittedly, the excitement died a bit when I stepped off the plane and was immediately overwhelmed by northern winds. Fighting to keep my hair out of (and my glasses on) my face, I made my way out of George Best Belfast City Airport and boarded a bus into the city centre. When I got off at my stop, a pint-sized lady with a floral sign that said “Lucy Campbell” caught my eye! After causing a huge fuss with much gushing and loads of PDA, we went for a delightful stroll around the city centre.

The sight I couldn’t get over was Belfast City Hall and I became a little obsessed with it as the weekend went on. Even in the rain, it was gorgeous.

Enjoying the first night in Belfast

That night we celebrated Halloween at her local haunt, a delightfully quirky bar called Cuckoo. Its alternative and eccentric style was so intriguing! It had three levels decked out with arcade games, leather couches, cuckoo clocks, disco balls and graffiti all over the walls. The seats were shaped like barrels, and the cocktails were served in jam jars. My favourite Halloween-themed cocktail was ‘Beetlejuice’ – a deliciously sweet mix of cranberry juice, vodka, sugar and lime. But the best part of this place was the top floor which had a ping pong table! The music was pretty sweet, too, and the DJ was an absolute legend – we spent the night dancing to ‘Say My Name, ‘Juicy’, ‘Gin and Juice’, and ‘Rude Boy, to name a few. I got pretty emotional when he put on ‘Return of the Mack’ at my request.

Needless to say, our costumes were last-minute. My friend wore a ripped grey t-shirt with denim shorts and a colourful headband, passing it off as 80s Madonna as a zombie. So I grabbed the first thing caught my eye in New Look: a headband with fluffy mouse ears. So naturally, I spent much of the night saying, “I’m a mouse, duh!”. There were some amazing costumes:

When we eventually retired home, we stayed in classic Halloween fashion – curled up under the duvet with takeaway chips, tea and Scream.

The next day, after our plan to get up early and go sightseeing, failed miserably, we spent a very windy early afternoon wandering around the Titanic Quarter. This was amazing because we got to see the actual plot of land where the Titanic was built, all in the shadow of the spectacular Titanic Museum, built to scale – the same height as the ship itself.

To escape the rain, we retreated to a delightfully toasty Honesty Box Cafe on the edge of The Dock. This place is run by a local church and doesn’t charge anything for the food they serve – they only leave the option for a donation – the Honesty Box. Decorated with wonderfully odd furniture (nothing matches!), this was the perfect place for us to warm ourselves up. It was here that I had literally THE creamiest chicken soup I’ve ever had in my entire life.

I also got to try a fifteen – a traditional northern Irish tray bake. It consisted of crushed digestive biscuits, marshmallows, glazed cherries and coconut shavings on top – genius! Why had I never had this before? But I must say that although it was blissful. I loved it – fifteens are incredibly sweet, so sweet I drank my tea with no sugar, and even with my sweet tooth, we could only manage this tiny piece between us.

After our meal we took a detour to The Big Fish before heading off to meet my friend’s boyfriend in town. The Big Fish is right by the River Lagan. It is essentially a printed ceramic mosaic sculpture of a fish, and the tiles are decorated with text and images related to the history of Belfast. I got way too excited about it… Why doesn’t London have one of these?!

We decided to do a taxi tour of the murals as any History student would. This was an exciting experience as our driver was a local who had lived through The Troubles, making the whole experience incredibly personal and intimate. Some of the standouts for me were the curbs which were painted red, white and blue in Loyalist areas, the mural of Bobby Sands, and something quite fascinating that caught my eye towards the end of the tour, which was the very poignant sight of a Palestinian flag hanging over a Nationalist home. It’s a sight I’ll never forget.

The tour finished at the Peace Wall, to which we added messages alongside those from the likes of Bill Clinton and the Dalai Lama. We then retreated inside for a Nando’s!

I hadn’t mentioned yet that it would be her boyfriend’s 24th birthday come midnight, so they decided to treat me to something extraordinarily Irish and take me to Fibber. This absolute gem of a bar is directly opposite the world-famous Europa Hotel – the most bombed hotel in Europe, by the by – and it was honestly one of the most enjoyable nights out I’ve ever had!

The upstairs saloon was sophisticated, with warm lighting and booths made of mahogany. At the same time, the back room was the quintessentially cosy Irish pub, complete with a live band, fireplace, general merriment and dancing.

Downstairs was completely different. It was a more modern-style bar with karaoke and ironic music choices. I must say that, though we flitted between both floors as the night went on, I definitely had the best time upstairs in the Irish pub. It was everything I’d imagined it would be – beer flowing, fiddlers fiddling, friendly strangers yelling happy things at each other, and skippy Irish dancing. I absolutely loved it.

We spent around Queen’s University Sunday morning in the leafy University Quarter. My friend took me to the Ulster Museum to check out an exhibition on The Troubles and the botanical gardens. Highlights included a stuffed Irish Wolfhound, which was the same size as me, and a garden full of blooming yellow roses – my favourite! We bought wind-up dinosaur toys as birthday treats for her boyfriend and baked him a bitchin’ carrot cake when we got home!

Later that day, we all went out to Funderland to celebrate her boyfriend’s birthday in style with some of his friends. Even though it rained incessantly and was freezing cold, it was such good old-fashioned fun that made me feel like a child again, when having fun was so simple. Of course, I spent most of my time screaming and had no voice by the end, but the log flume ride at the end made it all worthwhile and even though the boys splashed me, it was great fun! We enjoyed chips with gravy and cheese while watching the rides – the perfect thing to warm us up. And the KFC on the way home. And the rest of our cake. It goes on…

We went back to Cuckoo that night for casual drinks and ping pong to wind down after our day.

We woke up painfully early the following day to drive to the airport. I was sad to say goodbye to her again until Christmas, but I was so happy to have been shown such a great time in Belfast. Truth be told, northern life is just too cold for me, and I couldn’t wait to return to my perpetually heated uni room. But Belfast reminded me how easy it is to enjoy yourself in good company.

Belfast – what a blast!