Bangkok Of The Amazing Thailand – The Land of Smiles 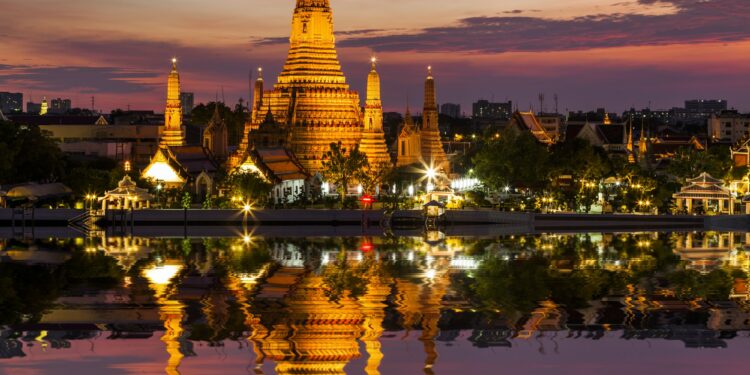 I arrived in Bangkok in May 2001 on a tourist visa but with the prospect of finding a teaching job. It wasn’t easy for me to find a Filipino with a powerful Tagalog accent when speaking English. They always looked for “Native English speakers” from America, Australia and Europe. So one doesn’t have to be British as long as s/he is European s/he is considered “Native English Speaker”. But that’s not the subject of my post. I just like to babble.

Amazing Thailand – The Land of Smiles is their tourism slogan. If you ever get into trouble, just smile, and they will smile back to you and sort things out for you. But if you fuss, they’ll call the police for you even if it’s not your fault, to begin with. No, I kid. But, seriously, if you show any irritation, they will start to withdraw from you, put all the blame on you, and leave you to sort things out yourself. So remember to always smile. You can win an argument with a smile, and you can go a long way with a smile.

The real name of Bangkok

I was challenged to memorise it when one boring day during my class, I asked my group of students, 2 Thais, 2 Koreans, 1 Chinese, 1 Taiwanese, who were between 8-10 years old, “What is the real name of Bangkok?” not expecting anyone to answer. Still, I just wanted to break the monotony of the class. But no sooner had I said it than the Thai girl started mumbling, and we all turned our heads to the direction where she was seated and effortlessly reciting it. We were all gobsmacked, and the day turned into an interesting one because we asked her repeatedly to say it. We just loved the tone of her voice, as if she was singing or chanting while reciting it. It really amused us all.

More surprisingly, when I asked her what it meant, she said she didn’t know. Neither did any of the Thai teachers in the school. But I heard from hearsay that it means “City of Angels”. I didn’t think it was true. I asked nearly every Thai I knew, but they couldn’t tell me. I searched high and low, and it all ended in vain. But a few days ago, I googled for it and found that it was true.

When shopping in Thailand, haggling is the rule of the game. Though I look like them, my accent gives it away, and they would give me an exclusive tourist price (ripoff). But after a couple of years in Thailand, I have soon learned how to get the more coveted Thai price (discounted price)–by smiling while haggling.

Where I shop in Bangkok

My Favourite Activities in Bangkok

On normal days, I would chill in my room after work and get out to dine or window shop in the night markets or sometimes or in the shopping centres. Taking a walk in one of the parks like the King’s Park, The Queen’s park, or the Lumpini Park was a nice recreation during weekends. Eating at a buffet restaurant was also a good treat from time to time.

During long weekends, my friends and I go jetskiing at Pattaya Beach and see around the city. Another place I loved was Bangsaen beach which is not very popular with foreigners but with the locals. Sometimes I would get on the river taxi boat and get to the end of the stops near China Town and go around by myself looking for cheap stuff, pirated DVDs, and that kind of stuff. I prefer being alone because I don’t have to wait for someone. I am pretty much a solo adventurer than going with a group.

A couple of years before left Bangkok, Thailand, shopping centres, including the new airport, Suvarnabhumi, started displaying gigantic Christmas trees. My so-called friends and I would go there on weekend nights and take pictures at their mocked winter Christmas set-up. It was good fun!

Part of the things that I miss in Bangkok is buying sacks of fruits in season, sit like a Buddha, and feast on them.

I love my life in Bangkok, although there are hard times as a foreigner, I am excited about living here!

Inexpensive And Free Things to do in Cologne, Germany

Switzerland on a Budget!

Switzerland on a Budget!

Affordable Honeymoon Destinations In The U.S.