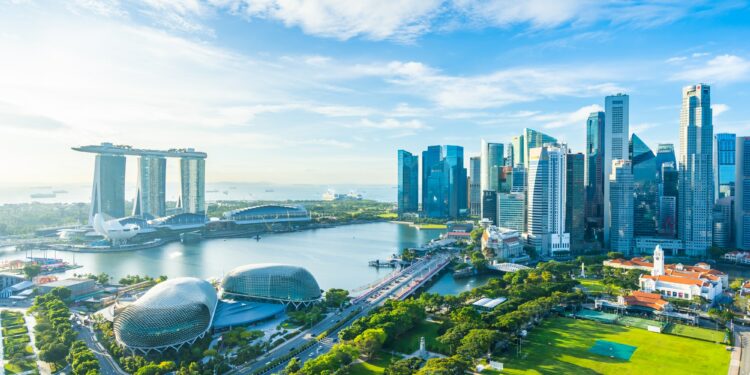 Singapore never fails to impress its visitors with its modern and sleek look. Impressive man-made structures dot the landscape, with picturesque parks and various activities to keep the sophisticated traveller entertained. This top ten list gives you places to visit in Singapore that may be out of the usual guidebooks. Some familiar, some not, but guaranteed to provide you with more to like about Singapore.

Singapore is one of the two countries in the world where a tropical rainforest is found within city limits, and it is located in the Botanic Gardens. This 74-hectare garden is home to thousands of plant species and is open to the public for free. Here you can find the famed National Orchid Garden (but this area requires an admission fee), which houses more than a thousand orchid species. Several attractions inside the park include the Saraca Stream, the Symphony Lake and the Evolutionary Garden, which features the story of how plant life on Earth has evolved through time. For a respite from the city’s fast pace, head to the Botanic Gardens.

Locals call it the Mandai Zoo, and it houses the world’s biggest captive colony of orangutans. Managed by the Wildlife Reserves of Singapore, the zoo has over 300 species of animals, none of which are behind bars or cages. Instead, the Singapore Zoo follows the principle of displaying the animals in spacious, open exhibits that closely mimic their natural habitats. Using moats, hidden barriers and often glass effectively separates animals from each other and from the guests. Around 16% of the animals on display are considered endangered species. The zoo also pushes the conservation of these animals.

The Night Safari is managed by the same group as the Singapore Zoo. It functions on the same basic principles of open exhibits that are non-threatening to the animals. As the name suggests, the animals here are nocturnal. The lights around the Night Safari mimic moonlight. Each zoo area represents one of the world’s seven geographical zones. Guests can walk around the several trails or ride the tram safari for a guided tour. Like the Singapore Zoo, the Night Safari houses some endangered species and their conservation is encouraged.

This world-famous bird park has various bird species that come from worldwide. One of the biggest attractions is the flock of flamingos (whose number echoes a very popular Disney movie about dogs). In 2006, it went through a renovation that included a new African wetlands exhibit, a bird hospital and some amenities for the visitors. Guests should catch one of the several shows that showcase the majesty of the birds in Jurong Park (the Birds of Prey show is particularly captivating), or take a walk through one of the many exhibits.

This is a small island in the northeast of Singapore. It used to be a thriving community with residents making a living off quarrying granite during the British colonisation period. The industry died down, and only a few hundred villagers reside there now. It is considered one of the last rural areas of Singapore. It describes what Singapore was like before it grew into an industrial superpower.

While many plans have been made to modernise Pulau Ubin, it has remained as it is for years because of its draw to tourists who want a change from Singapore’s sleek city. However, some ecological projects are being pushed to protect the island’s natural flora and fauna. This coral reef is home to quite some marine wildlife. Pulau Ubin can be reached by a bumboat ride from the Changi Village.

This is actually two islands off the south of mainland Singapore. One is called Pulau Subar Laut, which faces the sea and is fondly referred to as Big Sister’s Island. The other one is Pulau Subar Darat faces the mainland and is tagged as Little Sister’s Island. A narrow channel with strong currents separates the two islands. Legend has it that the islands grew from the bodies of the two sisters who drowned in a storm as they tried to escape the pirates who wanted to take them away. The islands are a favourite getaway for people who want an escape from Singapore’s urban life. Camping and snorkelling are favourite activities, and the island is home to the richest reefs in Singapore.

This 105-metre tall hill overlooks the business district of Singapore’s Central Area. Named Telok Blangah Hill initially, it was renamed Mount Faber for Captain Charles Edward Faber. He made the original road that allowed access to the top of the hill. It became a popular tourist destination connected to HarbourFront and Sentosa via a cable car and the HarbourFront MRT station.

It stands as an integrated resort in Marina Bay. Here you can find hotels, shops, restaurants and food stores, a convention centre, a yacht club, a casino and even a museum. But what makes Marina Bay Sands a unique and one of the top places to visit in Singapore is the Sands Sky Park, a seemingly long structure perched on top of three skyscrapers. It is longer than the Eiffel Tower and claims to be about the size of four and a half Jumbo Jets laid side by side. The infinity pool is limited to hotel guests. Still, tourists can visit the SkyPark by participating in a guided tour or buying a ticket. You can also explore The Shoppes below for the ultimate shopping experience. For an educational experience, check out the ArtScience Museum located within the resort’s grounds, an impressive structure resembling a lotus flower. It houses permanent exhibits relating to Singapore culture; it is also home to many touring exhibitions.

Gardens by the Bay

This is a nature park that is located near the Marina Reservoir. Built with the idea of enhancing the city’s greenery, it is also a move of the Singapore government to change from a “Garden City” to a “City in a Garden”. It has three gardens fronting the bay and allows visitors to take scenic routes from one to the other. The biggest garden of the three is the Bay South Garden. It has the biggest collection of tropical plants and impressive landscaped gardens. The curving structures that look like giant waves from afar are conservatories, the Flower Dome and the Cloud Forest.

Dotting across the landscape are Supertrees, structures built to resemble trees are actually vertical gardens that house various plants, offer shade and help cool the conservatories. These Supertrees become part of a light and music show called the OCBC Garden Rhapsody at night. Definitely one of the best places to visit in Singapore at night!

Singapore’s oldest reservoir has been around since 1868, built as a demand to supply fresh water for the growing population of settlers. Today only a little over one square kilometre of primary forest remains.

The MacRitchie Reservoir is popular among people who want to take scenic walks. A boardwalk goes around the reservoir’s perimeter and allows you to go through the secondary forest in the area. There is also a treetop walk that spans the highest points in MacRitchie. It is also a popular place for school field trips for water sports.

20 Carry-On Travel Essentials For Your Next Flight