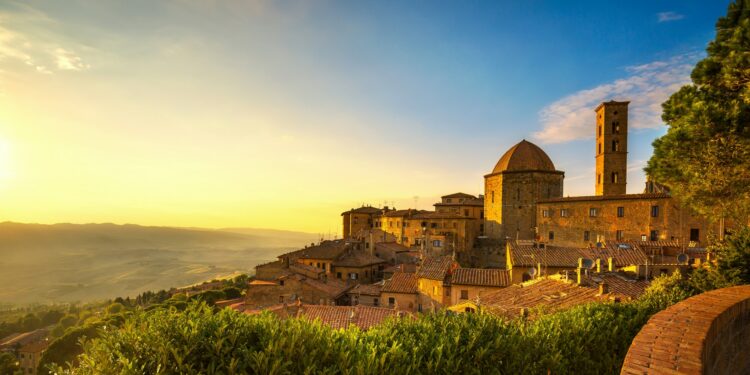 Being 52 kilometres away from Florence, the town was built before the 8th century BC. This city is situated on a hilltop with wide, long fortified walls that dated back to the 4th century BC and can still be seen today. It is customary to make the city a destination for many honeymooners. Therefore, Florence plus Volterra is perfect for a day trip.

What to See in Volterra?

In the 13th century, Volterra was ruled by the Republic of Florence. The erections of that era can still be seen today. The Palazzo de Priorio and the Palazzo Pretorio are located in the centre of the city.

The Palazzo de Priory is the old town hall. The tower of Palazzo de Priory, which was destroyed by an earthquake, was repaired around 1800. First, get a ticket to enter it; then, you will visit the interior and the bell tower.

The Santa Maria Asunta Cathedral, built in the 12th century near the Palazzo de Priorio and the Palazzo Pretorio, is also an exceptional location on the Volterra.

If you are interested in Etruscan history, this small town in Italy is the perfect place for that. Volterra Guarnachi Etruscan Museum, the 1st-century Roman amphitheatre and 4th century Roman Baths can be seen here.

Another great place to visit on the Volterra is the Fort of Medici, located on a hill above the Volterra.

Located on the picturesque coast of Italy, Amalfi, Positano is another small city in Italy which worth a visit. Positano is only an hour away from Naples and Pompeii. You can reach using a car or ferry from Capri, Naples, Salerno, or Sorrento. Positano has a mild Mediterranean climate. So Positano is an ideal place to visit at any time.

What to See in Positano?

The town is located on a hillock. Its stunning buildings give the city a beautiful view. The streets of this city pack with delicious restaurants, art galleries and shops. Walking along the streets of the city will be a memorable experience for you. The main destination of the city is the Amalfi coast.

There you can rent a chair, relax on the beach or else rent a kayak or paddleboard. Or maybe indulge in snorkelling or scuba diving. Many tourists prefer to enjoy the beauty of Positano by boat.

Although not as popular as Positano, Corricella is another charming small coastal town. Like Positano, it features colourful homes and constructions.

What to See in Corricella?

At Corricella, you can engage in offshore activities. In addition, one can visit Santa Maria del Graci, a church built in 1679. At the Northern end of Procida is a stronghold called the Terra Murata, built in the medieval era. It’s one of the prettiest sights in Naples Bay.

Alberobello ranks first among the most beautiful smallest cities to visit in Italy. Positano and Coricella are known for their colourful houses; the Alberobello is famous for its white conical buildings. Trullo is a name used for identifying these buildings. A trullo is a traditional Apulian dry stone hut. There are thousands of such structures in Alberobello.

This picturesque Italian city is today a UNESCO World Heritage City. Alberobello is located in the Southern Italian region of Puglia.

What to See in Alberobello?

Alberobello is a growing tourist attraction. Therefore, it is best to leave early in the morning to visit the city. It is also advisable to see during the off-season. You can take a tour among the city’s streets, taking photos of these strange but fascinating trullo buildings. Another exciting place to visit is the Chisa de Saint Antonio, a 20th-century Trullo church.

Varrena is located on the east coast of Lake Como, about 40 miles north of Milan. It is another scenic coastal town. Because of its proximity to the Swiss border, many cities in Switzerland can be reached via this city.

What to see in Varenna?

According to the places of visit,Varana divides into four main parts. Those four sections are the city centre, Castello de Visio, Villa Monastero and especially Lake Como.

Warren town centre is only ten minutes away from Varana train station. The main square is Piazza San Giorgio, surrounded by a historic hotel complex. A 14th-century church, the Chiesa de San Giorgio, adds to the beauty of the city centre. The Casa Museo Museum in the town is open from May to August. This is open to the public only on Thursdays to Sundays, and an admission fee is taken.

Finally, Lake Como is a special place in this city where you can relax, swim, or take a boat trip along the lakes.

Santa Magdalena is a beautiful small town in the valley at the foot of Italy’s famous Odle Mountains. The view of the hilltops overlooking the city is an unforgettable spectacle for travellers who are visiting.

What to see in Santa Magdalena?

Santa Madalena has a population of less than 400. Therefore, it is also not a great tourist spot. But the Saint Madeleine Church is one of the most popular places for photography. In addition, you can do mountain climbing and also you can indulge in snow-related sports, such as skiing in the winter.

Vernazza is one of the five coastal villages of Cinque Terre, Italy. The Cinque Terre is a centuries-old maritime village group. All these villages are now designated as UNESCO World Heritage Sites. Varanasi features a small coastal harbour fishing village. Fishing and tourism are the primary sources of income. They produce wine and olive also, and you can try and buy these products.

What to see in Vernazza?

Like many small towns in Italy, the city characterizes by colourful walls. You can also visit the 14th-century Santa Margarita de Antiochia Church, the 12th-century Doria Castle tower, and the fortifications built to protect the city.

Locating on the island of Sicily in Italy, the village is a filming location for the world-famous film Godfather. Situated above the sea, this village has no beach.

Things to Do in Savoca

The most popular tourist attraction in Savoka is Bar Vitelli. A scene from the movie The Godfather. The food and drinks here are delicious and are reasonable in price.

In addition, there are three ancient temples in Savoka, the 12th century Chiesa Madre, the 1250th Chisa de San Michel and the 15th century San Nicolas.

Finally, one can also visit the ruins of the ancient palace named the Pettifer Palace and the ancient city gate.

Pietrapertosa, located in the Southern Italian region of Basilicata, is the tallest city in the Basilicata and has been nicknamed “The City of Clouds.”

What to See in Pietrapertosa?

Pieterpertosa, like other small cities to visit in Italy, is rich in historical sites. The ancient Saracen Castle, the Asunta Cathedral, the Madre de San Giacomo and the San Francisco Church are some of the important historical sites in the city.

However, one of the most popular tourists attractions here is Flight of Angel’s high-speed, high-altitude zip line. It is a zip line connecting the cities of castelmezzano and Pietrapertosa, and many tourists visit here to get this experience.

Located about forty minutes from Bologna, the city is a tourist attraction as it hosts a painting festival every two years. In this event, local and international artists decorate the city’s walls with paintings.

The painted houses in Dosa offer stunning views to the tourists visiting here. It also houses a 13th-century castle, where you can see a museum and a wine cellar inside the castle.

When you travel from the North to the South of Italy, you will find many small towns with such a fascinating landscape and rich history, and in this article, we will describe only a few.

What to Expect In Maldives Resorts